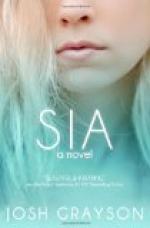 Josh Grayson
This Study Guide consists of approximately 41 pages of chapter summaries, quotes, character analysis, themes, and more - everything you need to sharpen your knowledge of Sia.

A type of amnesia brought on by extreme stress. It causes Sia to lose all her memories as the story opens.

Having lost all of her memories, Sia only has her iPod when she wakes up on a park bench. Sia sees that the equipment contains “Sia’s play list,” which provides Sia with her only clue about her identity. She sells it later for eighty dollars to a street kid in order to get clothes and sleeping bags for herself and Carol.

A broken bottle is the weapon Sia holds close as she settles in for her first night under the bridge. When she threatens Carol with it, Carol assure her that having a weapon and being willing to use it to defend herself are good.

Kyle’s parents own the BooBoo Bakery where Kyle works. Sia...

More summaries and resources for teaching or studying Sia.