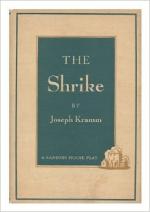 Books Like The Shrike by Joseph Kramm | Suggested Reading

The Bell Jar (1963), written by Sylvia Plath, focuses on a young woman's mental breakdown in New York City in the early 1950s. The novel is based on Plath's own experiences with depression and suicide attempts.

In Girl, Interrupted (1993), Susanna Kaysen chronicles the author's harrowing experiences in a mental hospital in 1967. Kaysen challenges notions of sanity and insanity, concluding that the definitions of each are culturally determined.

In the short story "The Short Happy Life of Francis Macomber" (1936), Ernest Hemingway offers a searing portrait of the power plays that can develop between a husband and wife and their destructive consequences.

Ken Kesey's One Flew Over the Cuckoo's Nest (1962) explores the harsh realities of mental institutions in the 1950s and early 1960s, including the practice of lobotomies, a surgical procedure that involves severing the nerve fibers in the brain that connect the...