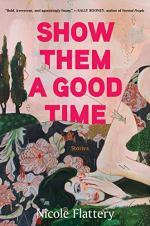 Show Them a Good Time Summary & Study Guide includes comprehensive information and analysis to help you understand the book. This study guide contains the following sections:

This detailed literature summary also contains Quotes and a Free Quiz on Show Them a Good Time by Nicole Flattery.

The following version of this book was used to create this study guide: Flattery, Nicole. Show Them a Good Time. New York: Bloomsbury, 2020.

Show Them a Good Time is a collection of eight short stories. In the titular story, a young woman returns to her hometown after living in a nearby city for two years. While she was away, the narrator acted in films (including pornography), worked as an escort, and had a relationship with an abusive director. Upon returning, she is accepted into a work simulation program in which she is hired to stand around in a garage pretending to work there. This program is designed to “improve [her] skills and eventually lead to long-term employment” (14). Voyeurs visit the garage to watch the simulation, and often hurl verbal abuse at the participants. The narrator becomes exceedingly attached to her coworker, a teenager named Kevin, and when he is removed from the garage, she is distressed. She shatters a light bulb, and when she climbs a ladder to replace it, she falls.

In “Sweet Talk,” a 14-year-old girl develops a crush on the Australian man her parents hired to renovate their kitchen. Over the course of a summer, she becomes increasingly close to him, and she is annoyed when his girlfriend Genevieve comes to visit. Genevieve and the Australian quarrel, and she leaves town. Afterward, the narrator enters the Australian's cabin while he is away and removes her clothes, preparing to seduce him when he returns. She pulls a string of dead flies from her mouth.

In “Hump,” a young woman develops a strange hump on her back shortly after her father's death. Reeling from grief, she takes a leave of absence from work (and from her relationship with her patronizing boss) and engages in a series of one-night-stands with older men. At the end of the story, she sees her boss again and learns that he has been fired from his job and that he is also growing a hump on his back. These developments please her and she begins looking forward to the future.

In “Abortion, a Love Story,” a young woman named Natasha is living on campus at college, but failing to attend any of her classes. She has a meeting with one of her instructors, Professor Carr, who warns her that she needs to improve her academic performance lest she end up in the “unemployment building” (67). Natasha begins dating Professor Carr, and one night while they are dining out, she returns to their table from the restroom and finds another young woman sitting in her seat. Her name is Lucy, and the two women discover they have a number of experiences in common. Lucy has just returned from Spain, where she wrote her first play. She shows the play to Natasha, who helps her turn it into a comedy. They perform the play, titled “Abortion, a Love Story” on campus. It is semi-autobiographical, featuring scenes from their lives and expressing an overarching theme of disdain for both the college and the roles and expectations society places on women.

In “Track,” a young woman living in New York City begins a relationship with a famous comedian shortly after she has been discharged from a mental hospital. The comedian is controlling and manipulative, but the woman tolerates this behavior because he supports her financially and she has no friends or family in the city to help her. But she gradually grows resentful of him, particularly after he begins seeing other women. The narrator is given a role on the comedian's new show (as a janitor), but ultimately walks off set and presumably out of the comedian's life.

In “Parrot,” a woman is living in Paris with her husband and stepson, with whom she is trying to establish a bond. The woman began seeing her husband while he was still married to his son's mentally ill mother. After bruises were discovered on the boy's body, his mother was declared unfit, and she ultimately died by suicide. The boy is still grieving and he is acting out in school, so frequently that his stepmother has a conference with his teacher every week. At one of these conferences, the teacher mentions that the boy is very good at running. The woman tells the teacher that she loves her stepson and she is trying very hard to improve their relationship and the boy's behavior. At the end of the story, the teacher calls the woman to the school so she can watch her stepson run in a race.

In “You're Going to Forget Me Before I Forget You,” a woman is on a book tour to celebrate the anniversary of the publication of her famous children's book, which is about two sisters that have an encounter with an alien. Her own sister calls and tells her that she is having strange memory lapses during her pregnancy, forgetting how to make small talk and how to kiss. The narrator reflects on the summer her mother died, when she was nine years old and her sister was 13. They disappeared for an entire day before turning up at the local swim club. At the end of the story, the narrator receives a phone call telling her that her sister is in labor. She arrives at the hospital and her sister looks at her like she does not recognize her, then says, “Hey, how are you?” (212).

“Not the End Yet” is set in the days leading up to an apocalypse. A woman named Angela goes on a series of dates with men she meets on a dating app, taking each one to the same restaurant. She reflects on her former marriage and the loneliness she feels. At the end of the story, she trades the Honda she got in her divorce for a sporty convertible and drives off into the sunset.

Show Them a Good Time from BookRags. (c)2022 BookRags, Inc. All rights reserved.