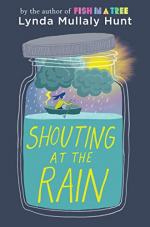 Shouting at the Rain Summary & Study Guide includes comprehensive information and analysis to help you understand the book. This study guide contains the following sections:

This detailed literature summary also contains Quotes and a Free Quiz on Shouting at the Rain by Lynda Mullaly Hunt.

At the beginning of summer, Delsie McHill's best friend, Aimee, announces that she has the lead in the play Annie. Aimee asks Delsie to help her understand Annie, believing Delsie can provide insight because she is an orphan – just like Annie. Delsie is surprised that she feels heartbroken at Aimee's question. Delsie's mother left her years earlier and Delsie lives with her grandmother, Bridget. Her grandfather, Joseph, died recently and her mother, Mellie, has never been part of Delsie's life. Delsie wants Bridget to talk about Mellie, but she finds the memories are too painful.

Delsie is looking forward to reuniting with her friend Brandy Fiester, who comes to Cape Cod every summer. When the girls meet, Delsie immediately notes that Brandy seems to have matured. Delsie expects them to pick up where they left off the previous summer, but Brandy is not that interested. While Delsie tries to ignore the warning signs, she feels that something is changing in their relationship. A short time later, Tressa arrives. Tressa's mother and Brandy's mother work together, and the girls begin pairing off for activities. Tressa is openly rude to Delsie, and Brandy follows Tressa's lead. Delsie is hurt at Brandy's betrayal, but she gives Brandy several more opportunities to renew their friendship.

Meanwhile, Delsie meets a new boy in Cape Cod. Ronan Gale has moved to town with his father, whose nickname is Gusty. Delsie, who is fascinated with weather, is enamored with Gusty's nickname but she is not sure she wants to be friends with Ronan. It takes only a few encounters before the two begin to connect. Ronan reveals one day that his mother died, but later admits to Delsie that he lied about that. His mother actually abandoned Ronan to his father's care, and does not want him around. As the friendship between Ronan and Delsie grows, Ronan spends more time with Delsie's close-knit neighborhood. Olive is an older woman who seems constantly angry but who is really dealing with loss and grief of her own. Henry and Esme have a daughter, Ruby, but clearly care deeply for Delsie. At one point, Esme assures Delsie that she will never be alone and that they will take her in if anything happens to Bridget. When Ronan's father announces they will be moving into a vacant house in the neighborhood, Delsie is excited for the new friendship. She also comes to realize she has never lacked for love in her life and that she has a strong family connection, even if the group is not the traditional definition of a family.

Shouting at the Rain from BookRags. (c)2022 BookRags, Inc. All rights reserved.