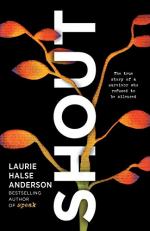 Laurie Halse Anderson
This Study Guide consists of approximately 40 pages of chapter summaries, quotes, character analysis, themes, and more - everything you need to sharpen your knowledge of SHOUT.

The following version of this book was used to create the guide: Halse Anderson, Laurie. SHOUT. Viking, 2019.

SHOUT by Laurie Halse Anderson is a poetic memoir written in response to the onslaught of voices unearthed by her work SPEAK. These are the voices of the survivors who reached out to Anderson after her publication of the novel SPEAK, the survivors to whom she dedicates her work SHOUT. Anderson begins the collection of poems with the declaration that the work is “the story of a girl who lost her voice and wrote herself a new one” (1). In truth, it is a collection that lyrically describes the terrible tragedies that can render victims mute. She starts the collection with “in the name of love,” a poem that opens with a jarring image of a violent death: a young man’s head sliced in two by a machine (7). Yet the poem ends with possibility and promise: the birth of a baby on the side of the road during the liberation from Holocaust concentration camps. Anderson weaves her way through the stark landscape of lives, particularly her own, that were riddled with violence and abuse. This trauma often leaves the voiceless in its wake, but Anderson illuminates the ways in which victims can heal and find a new voice. She also reiterates the strength in solidarity, and emphasizes the idea that collective voice has great power to make change.

SHOUT opens with a family history plagued with trauma as Anderson describes her father’s PTSD after World War II. Anderson then segues into a jarring and premature coming of age experience foisted upon an adolescent girl raped the summer before high school. Anderson’s Young Adult novel SPEAK is fictional but echoes the author’s real life traumatic ordeal. Somehow after the rape, Anderson is able to piece herself back together and find the voice necessary to tell her tale, albeit in a fictionalized version. Once Anderson “speaks,” a series of collective voices, possibly as many as a million, respond with stories of their own trauma. SHOUT captures Anderson’s journey to find her voice and use it to empower other victims through the written word. The collection progresses from childhood memories and experiences, to adolescent angst exacerbated by trauma, to empowered adulthood. The poems serve to create a collective shout against sexual abuse, assault, and rape. It is, quite literally, a shout out for change in a society that insists on stifling the female voice while promoting the male voice as a predatory primal scream from an alpha male.

The collection moves chronologically, beginning with the tortured memory of her veteran father and the subsequent abuse inflicted on her mother as a result of his “ghosts” (283). Her parents’ silence in the face of trauma seem to be a legacy for Anderson, and thus when faced with her own trauma, rape at the age of thirteen, her response is pre-destined. The ordeal strips her of her voice, and fragments her sense of self on every level. The poems then trace the creation of a new voice, and development of a new sense of self. A trip to Denmark in late adolescence gives rise to a fresh vocabulary and a sense of promise. Her experience abroad gives her a new language and renewed hope, and armed with these she begins writing with great determination. The result is SPEAK, and Anderson is unprepared for its success, and stunned by its overwhelming response. Part Two of the memoir addresses the shared experiences of trauma, and the censorship brought about not only by SPEAK, but the ways in which society censors matters involving sex, sex education, sexual assault, and rape. Anderson expresses how troubling this is given the amount of sexual misconduct that occurs in adolescence.

Part Three serves as a bookend, as Anderson reflects on her family and how integral family is to our storylines. Connections and experiences forge stories; stories that need to be told. Sharing stories makes everyone stronger, voices equal power.

Early on, Anderson speaks of her mother being “picassoed” in front of her (10). This aptly used verbiage captures the results of Anderson’s own trauma, and this collection of poetry serves as the ensuing artwork she has pieced together through the use of language, and shared experiences.

More summaries and resources for teaching or studying SHOUT.