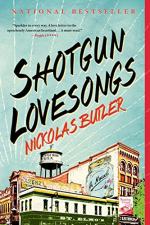 Life in a small town can be both a blessing and a curse, the reader learns in the novel Shotgun Lovesongs by Nickolas Butler. The people in small towns can be both embracing and smothering, helpful and crippling. As adults, four men who grew up in a small town discover themselves trying to achieve success in careers and marriage while still trying to impress each other. The way in which the men deal with their regrets and their successes sometimes alienates them from one another. After major life changes they all struggle to reconcile their relationships and maintain their friendships.

Of the five friends, Lee is believed to be a success because he has earned worldwide fame for his music. He endeared himself to the community because the album that skyrocketed him to fame was written about Little Wing, the small town in which he and his three childhood friends — Henry, Kip, and Ronny — grew up. Henry never left Little Wing. He married his childhood sweetheart, Beth, and took over his father’s dairy farm. Kip made his fortune trading commodities. He returned to Little Wing to buy the town’s deteriorating feed mill and bring it back to life. The mill needed so much work that Kip has teetered on the edge of bankruptcy. Ronny was a rodeo star until he fell and hit his head while drunk. The head injury caused permanent brain damage. Ronny was no longer able to ride in the rodeo. His friends pitied him because they thought he would never have a successful life or be able to find love after his accident.

The conflicts between the men begin when Kip is married to Felicia. He invites all of his friends with the exception of Ronny. Because Lee is particularly protective of Ronny, he insists to Kip that Ronny be included. When Lee sees the amount of alcohol at the bachelor party he immediately realizes it might not have been the best idea to have Ronny included. The evening turns out successfully, however, because Ronny gets the phone numbers of both the women who worked as strippers at the party. He and one of the women, Lucy, soon begin dating. Lee and Kip’s relationship is further strained when Lee and his actress girlfriend Chloe arrive at the wedding to discover that Kip has told the paparazzi they would be there. Lee is especially angry because he has been sold out to the paparazzi in his hometown, a place he treasures because he does not have to be a music star there.

Lee and Chloe get married in a fancy New York ceremony. Lee moves to New York to live with Chloe because he could not convince her to move to Little Wing. The marriage only lasts four months. Lee returns to his home in Little Wing disappointed, depressed, and feeling like a failure. In his distress he tells Henry about a one-night stand that he and Beth had before Henry and Beth were married. Even though the encounter had been during a time when Henry and Beth were not even dating, Henry is still angry and feels betrayed by both Beth and Lee because he was never told about the incident. Not only is Henry and Lee’s relationship ruined, but Beth and Henry’s relationship is now troubled.

Although no one had ever thought it would happen to him, Ronny gets engaged to Lucy who is pregnant with his child. Kip arranges for the two to get married in the mill and even pays all of the expenses. When Lee compliments Kip on doing a good thing for Ronny, Kip admits how far underwater he is financially with the mill. Lee later arranges to buy the mill, giving him a place to build a recording studio and music venue in Little Wing.

Henry and Lee’s reconciliation is more difficult. Even though Ronny had asked Lee to apologize to Henry as a wedding gift for Lee, Le was unable to do so. It is after Ronny’s wedding that Henry and Lee drink together in the VFW and finally talk out their problems. They also steal a jar of pickled eggs from the bar together, a prank that turns serious when Lee is shot in the leg after he throws an egg at a stranger’s car. Because he does not want the publicity, Lee refuses to go the hospital to have to bullet removed. Instead he decides that he and Henry can remove it themselves. In the course of the pain, blood, and fight of getting the bullet out, the two men repair their relationship.