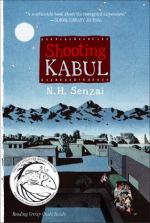 N. H. Senzai
This Study Guide consists of approximately 49 pages of chapter summaries, quotes, character analysis, themes, and more - everything you need to sharpen your knowledge of Shooting Kabul.

In Chapter 21, the family received a phone call informing them that the family who rescued Mariam in Jalalabad had been found. Unfortunately, the family had lost Mariam and didn’t know where she was. Later, at a restaurant, Habib and Uncle Amin discussed the recent elections in Afghanistan while Fadi and his cousin Zalmay discussed the plan to take revenge against Ike and Felix.

In Chapter 22, the results of the photography competition were delivered to Ms. Bethune at school. She read out the results to the class: Anh came in second place and Fadi received an honorable mention, but neither of them won the plane tickets. Fadi ran out of the classroom in despair.

In Chapter 23, Fadi and the other Afghani students decided to take revenge against Ike and Felix by luring them into the woods. The plan was to beat them up...

More summaries and resources for teaching or studying Shooting Kabul.