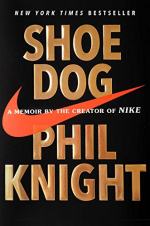 Phil Knight
This Study Guide consists of approximately 39 pages of chapter summaries, quotes, character analysis, themes, and more - everything you need to sharpen your knowledge of Shoe Dog.

The following version of this book was used to create the guide: Knight, Phil. Shoe Dog. Scribner, 2016.

One morning while on a run, Phil Knight has a Crazy Idea. At the age of 24, he decides to import running shoes from Japan. With some funding from his father, he is able to fly to Japan and travel the world in the process. After a brief stint selling encyclopedias in Hawaii with a friend from business school, he flies to Tokyo. He negotiates a deal with Onitsuka, a shoe company which sells Tiger shoes. When they ask what American company he is representing, he panics and makes up a name— Blue Ribbon Sports.

Knight completes his world tour after this success. After he returns home, he earns a CPA and works as an accountant for some stability. When shoe samples from Onitsuka arrive, he sends two pairs to his old track coach from the University of Oregon, Bill Bowerman. Bowerman loves the shoes and asks to be partner in his new company. Knight is overjoyed and begins to sell the shoes. Eventually, he earns the executive distribution rights to the entire West Coast.

Overjoyed, Knight returns to Japan to climb Mt. Fuji and falls in love with a wealthy girl named Sarah. Though he has high hopes for this relationship, her parents disapprove and the romance fizzles out. Knight is heartbroken but still manages to hire an old friend, Jeff Johnson, to sell for Blue Ribbon. Soon, however, Knight feels annoyed from Johnson’s constant flood of letters containing sales updates. He ignores them, choosing silence over responding.

Knight, still working as an accountant, requires more time to invest into Blue Ribbon. He switches to teaching accounting instead, and is stunned by a student in his class. He eventually hires and marries Penelope Parks— now Penny Knight. He later quits this job, and the pair even have two sons. On another subsequent trip to Onitsuka’s headquarters, he befriends a man named Fujimoto. He is excited about having this contact on the inside, sending out a memo to every Blue Ribbon employee about hiring a spy.

At this time, Kitami begins to act suspiciously. Knight soon realizes that Onitsuka prioritizes their domestic sales, and only ships Blue Ribbon the leftovers. This is why the orders have contained many mistakes lately.

Knight is constantly sacrificing profits and pouring them back into shoes in order to help his company grow as fast as possible. To back up his loans, Knight also decides to work with a Japanese trading company called Nissho Iwai.

When Knight hears rumors of Kitami wanting to terminate the contract with Blue Ribbon, Knight decides to bring him to the U.S. to try to change his mind. Kitami is rude and curt, confirming some of Knight’s suspicions. Knight steals some papers from Kitami’s briefcase, and proves that he is meeting with other shoe distributors in the U.S. Kitami even asks to buy Blue Ribbon, but Knight says no. Knight begins to work with his team to create a new company, one they name Nike.

Kitami soon hears of the new company, and confronts them about it. He decides to sue them for breach of contract, which crushes their spirit. In this time of crisis, Knight delivers a rousing pep talk and helps them regain their confidence. As the company grows, Nike is able to recruit a number of celebrities to endorse their shoes. The most notable of them is a runner named Prefontaine, who was a breakout sensation. When he later passes, everyone at Nike is devastated.

On one occasion, Knight requests over $1 million from the Bank of California and misses a large payment to Nissho. Ito, the representative of Nissho, ends up realizing that Knight’s company is going nowhere but up, and decides to pay off their debts and to continue funding Nike. Though the management team at Nike frequently runs into stressful logistical problems like this, they are all close friends. They fondly refer to each other as Buttfaces.

Another major problem they have to deal with is one raised by their competition. The other major shoe companies invoke an obscure rule, the American Selling Price. This holds Nike accountable for $25 million paid to Customs, but Nike does not have this money. Eventually, they take a multi-pronged approach to settle for $9 million instead.

In the late stages of Nike, the company goes public and gains hundreds of millions in value. They also expand into Chinese markets. Ultimately, Knight reflects on his own life and finds that he has done most everything he has ever wanted to do. The one remaining step is to give advice to the next generation— and so he writes Shoe Dog.

More summaries and resources for teaching or studying Shoe Dog.