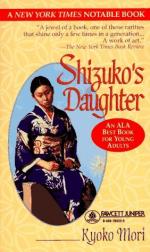 Kyoko Mori
This Study Guide consists of approximately 107 pages of chapter summaries, quotes, character analysis, themes, and more - everything you need to sharpen your knowledge of Shizuko's Daughter.

On the morning of her seventy-fifth birthday, Masa wakes to the sound of music coming from the nearby schoolyard. Since her husband's death some nine months before, she had taken to sleeping in the family room. The first thing she saw every morning was the Buddhist altar where she honored the spirits of her ancestors, of which Takeo was now one.

She did not think of Shizuko and Takeo as her ancestors, they remained separate from the others: her first-born that had died of measles before the others were born; another son killed in the War; her parents and parents-in-law. She wanted to join Shizuko and Takeo soon so that the three of them could then join the others.

She thought of Yuki who had visited her for two weeks during the spring break. Together they had worked...

Shizuko's Daughter from Gale. ©2005-2006 Thomson Gale, a part of the Thomson Corporation. All rights reserved.