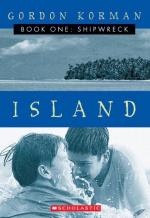 Gordon Korman
This Study Guide consists of approximately 39 pages of chapter summaries, quotes, character analysis, themes, and more - everything you need to sharpen your knowledge of Shipwreck.

Shipwreck by Gordon Korman is the first of the 'Island' series. This first book in the series introduces the adolescents who are part of an ongoing program called Charting a New Course (CNC) in which troubled youth sent to sea for a month to learn skills such as cooperation, teamwork, and encourage friendship and camaraderie. On July 11th they cast off from the marina in Guam with a total of eight on board including Captain Cascadden and first mate, Mr. Radford.

The crew consists of Luke Haggerty, Will and Lyssa Greenfield, Charla Swann, Ian Sikorsky and J. J. Lane. Luke Haggerty was caught with a gun in his locker at school and given a choice to either join the CNC program or spend time in jail for a felony conviction. Will and Lyssa Greenfield are siblings whose constant fighting and violent behavior towards each other left their parents with little choice but to find a way to teach them the value of cooperation. Charla Swann is a young, athletic girl who excels in several areas but who cannot avoid the pressure put on her by her father to win herself a scholarship. Ian Sikorsky's parents felt he spent too much time in front of the television and required socialization skills in order to survive. and J.J. Lane suffered from neglect from his movie star father who was absent so often that J.J. tried more and more desperately to get his attention, finally driving his father's car through the front door of an art gallery.

In the beginning, the adolescent crew learn how to raise and lower sails and receive instruction on a variety of related science-based subjects including how to identify schools of fish, whale watching, wave heights, water temperatures, and how to index these to their location using handheld GPS. They are required to keep logs of their experiences on board as well. Only three days into their month-long trip, they encounter a storm that while at first seems relatively harmless, grows into a gale that seems to have a life of its own. At it's worst, bad judgement by one youth causes an accident that sweeps Captain Cascadden off the deck and into the ocean. The first mate Mr. Radford deserts the ship in the middle of the night two days later, leaving the six young and inexperienced crew members to fend for themselves. A collection of mistakes hasten the sinking of the Phoenix, leaving the four surviving youth clinging to a cabin top which is all that remains of the schooner. Unconscious and nearing death, their raft floats to an island where they awake to a heavy storm. This then truly forces them to cooperate in order to survive.

More summaries and resources for teaching or studying Shipwreck.