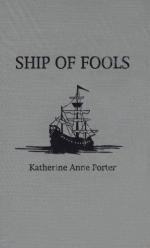 Amparo is one of the group of Spanish dancers on the ship. She is beautiful but often ungracious. She has sex with men for money, which she then hands over to her lover, Pepe.

Frau Greta Baumgartner is Karl Baumgartner's wife. She is unable to halt her husband's decline and watches disapprovingly as he sinks further. Sometimes, she takes out her frustrations on their helpless son.

Hans Baumgartner is the timid and delicatelooking eight-year-old son of Karl and Greta Baumgartner.

Herr Karl Baumgartner is a sickly looking German lawyer, who practiced law in Mexico City. For some years, his practice flourished, but then he developed a drinking problem; he could not resist his longing for brandy. His career went into a decline, and he lost three important cases in the Mexican courts. The stress of failure gave him stomach pains...