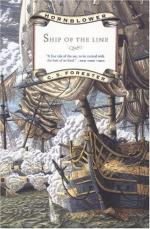 C. S. Forester
This Study Guide consists of approximately 50 pages of chapter summaries, quotes, character analysis, themes, and more - everything you need to sharpen your knowledge of Ship of the Line.

Ship of the Line Summary & Study Guide includes comprehensive information and analysis to help you understand the book. This study guide contains the following sections:

This detailed literature summary also contains Topics for Discussion and a Free Quiz on Ship of the Line by C. S. Forester.

Captain Horatio Hornblower has recently returned from a successful cruise in HMS Lydia. News of his impressive successes fires the popular imagination and circulates in the Admiralty. Hornblower is appointed captain of HMS Sutherland, 74, and assigned to join a blockading fleet under the command of Rear Admiral Leighton. Hornblower pursues his duties with typical rigor and, when given brief detached command, conducts an astounding five raids in two days. He then rejoins the fleet and encounters four French ships-of-the-line. As the main body of the fleet attempts to close, Sutherland engages the entire French squadron, causing extensive damage to all enemy ships before becoming dismasted and ultimately wrecked. Hornblower finally strikes his colors and is taken into French captivity.

Hornblower's cruise aboard Lydia is widely-known and discussed in all of England, yet he returns to a difficult life of near-poverty and briefly struggles to find a new command. His friend and love-interest, Lady Barbara Leighton, uses her considerable political influence behind-the-scenes to assist in his appointment as captain of Sutherland—Hornblower never ascertains how much of his appointment is due his own merit. In any case, he is placed under the immediate command of Barbara's husband and the situation proves delicate. For several weeks, Hornblower struggles to provision, arm and man Sutherland as appropriate for a prolonged appointment of blockade service. As customary for the period, he resorts to a variety of advertising and impress to man the ship and mixes bluster, threats and flattery, oiled with his meager personal wealth, to obtain armament and provisions. Finally, Sutherland sails without about a quarter of its full complement. Sutherland escorts a group of merchant ships owned by the East India Company beyond the threat of French warships and then parts company with the merchant fleet. In a final act of exasperation, Hornblower presses twenty men from each of the merchant ships—violating British law but, finally, completing his crew.

Hornblower then returns to the established rendezvous point and finds Leighton's squadron not fully assembled. He is given free reign to cruise the Spanish coast for a few days before again visiting the rendezvous point. He makes excellent use of his time and completes five audacious and successful raids in two days. He first captures a French brig that briefly mistakes the Dutch-build Sutherland for a French ship-of-war, and thereby divulges the secret French recognition signal. Using this knowledge he flies a French flag—a legitimate ruse de guerre—and a few hours later storms and destroys a French fortress. A few hours later, he captures several smaller vessels and boards a near-hysterical Spanish cavalry officer. Learning of a nearby Italian army marching under Napoleon's army, Hornblower sails to a point where the road parallels the seashore and takes the Italian forces under his guns, causing widespread destruction. He finally rejoins the squadron and enters a period of patrol. When dirty weather occurs, Admiral Leighton's flagship becomes distressed and is nearly lost—but Hornblower takes it in tow and claws off the lee shore to safety.

Some time later, the English squadron encounters a French squadron that has evaded the English blockade of Toulon. Sutherland is the closest English ship so pursues the French squadron while the other English ships attempt to close. When it becomes obvious that the English squadron will not be able to engage before the French squadron reaches the safety of a friendly Spanish harbor, Hornblower moves to engage the four French ships-of-the-line by himself. A fierce four-on-one battle ensues, though the odds are patently hopeless for Sutherland. Even so, the British ship performs exceptionally and disables or extensively damages all of the French ships-of-the-line. During the combat Sutherland suffers frightening casualties, including William Bush, who loses a foot. Hornblower, miraculously, emerges unscathed. As a dismasted Sutherland drifts ashore under heavy fire from the French ships and the Spanish fortress, Hornblower notes her inability to return effective fire and, finally, strikes his colors.

More summaries and resources for teaching or studying Ship of the Line.

Ship of the Line from BookRags. (c)2022 BookRags, Inc. All rights reserved.