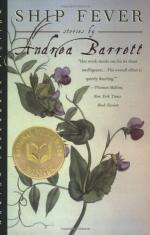 Andrea Barrett
This Study Guide consists of approximately 34 pages of chapter summaries, quotes, character analysis, themes, and more - everything you need to sharpen your knowledge of Ship Fever.

"But Tati saw the worst in what was there. He saw that fat hand on my arm and those eyes fixed on my childish chest. He had a small pruning knife in his hand. When he called my name and I dropped the pot, Leininger clamped down on my arm. As I was tearing myself away, Tati flew over and jabbed his knife into the back of Leiniger's hand."
p. 17

"They never reproach each other. When the tension builds in the house and the silence becomes overwhelming, one or the other will say, 'Do you remember...?' and then launch into one of the myths on which they have founded their lives. But there is one story they never tell each other, because they can't bear to talk about what they have lost...

More summaries and resources for teaching or studying Ship Fever.