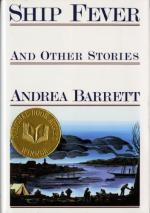 Andrea Barrett
This Study Guide consists of approximately 44 pages of chapter summaries, quotes, character analysis, themes, and more - everything you need to sharpen your knowledge of Ship Fever and Other Stories.

Ship Fever and Other Stories Summary & Study Guide includes comprehensive information and analysis to help you understand the book. This study guide contains the following sections:

This detailed literature summary also contains Topics for Discussion and a Free Quiz on Ship Fever and Other Stories by Andrea Barrett.

Ship Fever and Other Stories is a collection of eight short stories/novellas by the author Andrea Barrett. The stories weave historical and fictional characters, moving through the past and present. They center on themes of scientific discovery, achievement, failure, and loss.

In "Ship Fever," the title novella, Dr. Lauchlin Grant works at a Canadian quarantine station for Irish immigrants fleeing from the Great Famine. In "The English Pupil," Carl Linnaeus tries to make sense of the confusion that his life has become since his strokes and has visions about his former students and the plants that he named after them. In "Rare Bird," Linnaeus's theory that swallows hibernate under the water in winter serves as the backdrop for two displaced women who test his theory and find it false. In "Birds with No Feet," a young man travels the world collecting animal and insect specimens but finds his dreams dashed over and over again. Set in the eighteenth and nineteenth centuries, these stories speak of the development of science and the sociological context of the periods the characters exist in.

Barrett also includes several pieces set in contemporary times, although each also draws heavily on the past and the characters' memories. In "The Behavior of the Hawkweeds," Gregor Mendel's failure in hybridizing hawkweeds haunts a contemporary couple who are attached to Mendel's story. In "The Littoral Zone," two marine biologists examine their life-changing affair and skirt the issue of whether it was worth it. In "Soroche," a woman loses her husband and her wealth, which reminds her of the unborn child she lost years before. Finally, in "The Marburg Sisters," two sisters reflect on their shared past and have a conversation about their dying father with their already dead mother.

More summaries and resources for teaching or studying Ship Fever and Other Stories.

Ship Fever and Other Stories from BookRags. (c)2022 BookRags, Inc. All rights reserved.