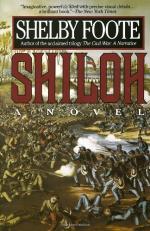 Shelby Foote
This Study Guide consists of approximately 31 pages of chapter summaries, quotes, character analysis, themes, and more - everything you need to sharpen your knowledge of Shiloh.

This detailed literature summary also contains Topics for Discussion and a Free Quiz on Shiloh: A Novel by Shelby Foote.

The story opens with men of the Confederate Army marching toward Pittsburg Landing. Lieutenant Palmer Metcalfe, who is an Aide-de-Camp for the staff of General Albert Sidney Johnston, describes the men and his impressions of the situation. He is called on to help draft the battle plan and notes that Napoleon's Battle of Waterloo is used as a blueprint. Palmer says that he is pleased with the result, even though he played a very minor role. Palmer later realizes that the very thing he had considered a stroke of genius turned out to be the downfall of the Confederate Army at Shiloh. The troops became so intermingled that men were being given orders by commanders they didn't know. The commanders were asked to lead men without knowing their strengths. Palmer is wounded and his horse killed as he helps repulse the final attack by the Union soldiers.

Captain Walter Fountain is adjutant for the 53rd Ohio. He is upset because he is been forced to take a turn at guard duty, which is something not usually required of men of his rank because of their duties during the day. As he waits out the few hours remaining before the dawn, he writes a letter to his wife. In that letter, he tells his impressions of the situation. He laments the fact that he has not seen his wife for six months and that he loves her dearly. His letter is stopped mid-word and it is later revealed that he is hit by a mortar round fired by the confederates into the Union camp.

Private Luther Dade is a Rifleman of the 6th Mississippi. He is among those that storm the Union Camp in what becomes known as the Battle of Shiloh. He's wounded and sets out on foot in search of a doctor but finds himself unable to continue and eventually sits in a shaded area to rest. There he sees Johnston brought in from the battlefield with a fatal wound.

Private Otto Flickner is a connoneer with the 1st Minnesota Battery. Flickner is in the heat of the battle and when he sees a great many of his fellow soldiers fall to Confederate fire, he leaves the battlefield and joins a mass of Union soldiers who have done the same. Over the course of several hours, he thinks about his decision and knows that he has to face his fear if he is going to be able to live with himself and so returns to the fight.

Sergeant Jefferson Polly is a scout with Forrest's Cavalry. It is Polly who discovers the Union reinforcements arriving by boat and he alerts Forrest who tries to get other Confederate commanders to withdraw. Forrest is unsuccessful and Polly is among those who remain with him to fight the Union troops the following day. The 23rd Indiana is among the Union forces facing the Confederates. They take serious losses and one notes that none of them like the army, which results in dislike for each other.

More summaries and resources for teaching or studying Shiloh: A Novel.