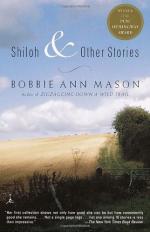 After appearing initially in the New Yorker magazine in 1982, Bobbie Ann Mason's story "Shiloh" became the title story in her first collection of fiction, Shiloh and Other Stories, also published in 1982. The volume was well-received by critics and earned nominations for a National Book Critics Circle Award, an American Book Award, and a PEN/Faulkner Award. Mason also won the 1983 Ernest Hemingway Foundation Award for best first fiction. "Shiloh" has been widely anthologized in literature texts, and critics have demonstrated an ongoing interest in the story.

Readers and critics admire "Shiloh" for the author's spare, unadorned style and her ear for rural Southern speech patterns. Set in western Kentucky, "Shiloh" is the story of a disabled truck driver, Leroy Moffitt, and his wife, Norma Jean. Like Mason's other fictional characters, the Moffitts are rural, working-class Southerners who are affected by the changing culture in which they live. Norma Jean, Leroy, and Mabel Beasley-Norma Jean's mother-are locked in a struggle over the Moffitts' marriage, a struggle that culminates at the Shiloh Civil War battlefield Through this story, Mason addresses the theme of individual identity in a time of social change. As the landscape of rural Kentucky changes, so do the cultural forces exerting pressure on the Moffitts' marriage.