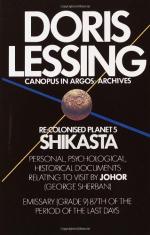 Doris Lessing
This Study Guide consists of approximately 33 pages of chapter summaries, quotes, character analysis, themes, and more - everything you need to sharpen your knowledge of Shikasta.

Re: Colonised Planet 5, Shikasta was written in 1979 by Doris Lessing, a Nobel laureate in literature. "Shikasta" is the name of the central planet in the book and is the first in a series of five in her Canopus in Argos series.

Shikasta is one of the colonies of the galactic empire Canopus, and is shared with a friendly empire named Sirius and a hostile empire known as Puttiora. It functions largely as an allegory for earth. The book covers Shikasta's history, from the beginnings of sentient life all the way until the mythical Third World War, where humanity mostly destroys itself. In fact, the book is subtitled, "Personal psychological historical documents relating to visit by Johor (Gerge Sherban) Emissary (Grade 9) 87th of the Last Period of the Last Days". The book has an unusual structure. It reads as a loosely tied-together series of reports ranging over hundreds of thousands of years. Some are reports from historical archives, and others are reports from emissaries on the surface and human records. The story contains many religious elements, mostly from the monotheistic traditions.

Doris Lessing calls Shikasta space fiction in the introduction. While it is a type of science fiction, it does not focus primarily and technology, but instead on the themes that a futuristic setting allows for; for instance, the viewing of humanity's rise and fall as a whole over tens of thousands of years.

The story begins with Canopean Empire introducing new species to Rohanda, a planet they're newly colonizing. They raise one of the dominant mammalian species to sentience in part by bringing "the Giants" from another colony to live on the planet. They do this in part to speed up Rohandan evolution. Their goal is to proceed to the "Lock" stage, where Rohanda will be locked in sync with all the other planets in the Canopean Empire. The "Lock" is a complicated concept, but involves bringing all life and thought into a kind of harmony that gives all life peace and strength. The Lock is in part brought about by rock formations on the planet.

As a result, the Rohandas live under utopian conditions for millennia, but an unexplained cosmic event breaks the Canopean Lock with Rohanda. Rohanda is not deprived of the mutual harmony - and they lose the most crucial resource in the universe - SOWF or substance-of-we-feeling. As a result, they begin to degrade. A renegrade planet from Puttioria, Shammat, begins to exploit this weakness. This causes Rohanda to degrade further and for the Canopeans to rename is Shikasta or "the stricken."

The rest of the book is the story of Canopean emissaries' attempts to save Shikasta from the "degenerative disease." They send agents to the planet and try to identify individuals who haven't become too corrupt to fix Shikastan history. In the 20th century, Shikasta is at its low point and on the brink of apocalypse. The core story of Shikasta occurs here, as one of Canopus's main emissaries, Johor, incarnates as a child and becomes a world leader that ushers the remains of humanity into a new age, prepared again for the Lock. The book ends as the Lock is restored.