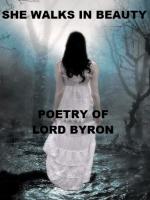 George Gordon Byron, 6th Baron Byron
This Study Guide consists of approximately 32 pages of chapter summaries, quotes, character analysis, themes, and more - everything you need to sharpen your knowledge of She Walks in Beauty.

Byron's friend Percy Bysshe Shelley wrote an essay that captured the artistic theory of that whole age of romantic poets. Entitled "A Defence of Poetry," the essay examines the various functions of reason and imagination in the poet's work. It was originally published in 1821 and is reprinted at http://www.library.utoronto.ca/ utel/rp/criticism/shell_il.html (last accessed August, 2001).

Harvard University Press has collected the poet's most important personal writings in the 1984 collection Lord Byron: Selected Letters and Journals, edited by Leslie A. Marchand.

One of the most influential recent books about romanticism is by influential critic Northrop Frye, whose short 1968 book A Study of English Romanticism gives an excellent quick background to the cultural movement...

More summaries and resources for teaching or studying She Walks in Beauty.

She Walks in Beauty from Gale. ©2005-2006 Thomson Gale, a part of the Thomson Corporation. All rights reserved.