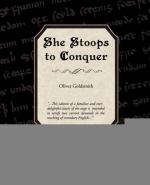 Introduction & Overview of She Stoops to Conquer

She Stoops to Conquer Summary & Study Guide includes comprehensive information and analysis to help you understand the book. This study guide contains the following sections:

This detailed literature summary also contains Further Study and a Free Quiz on She Stoops to Conquer by Oliver Goldsmith.

Most everyone has been the target of practical jokes, and most have been out on blind dates. Oliver Goldsmith bases his 1773 comedy She Stoops to Conquer on two such incidents, creating a complicated, convoluted plot based on miscommunication and mistaken identities. At the same time, Goldsmith explores a series of ethical and aesthetic issues.

Audiences responded favorably to She Stoops to Conquer when Goldsmith'splay debuted in 1773 and have continued to do so ever since. Significantly, from its debut, it earned popular approval and remains today one of the few 18th century plays to be regularly performed for modern audiences. While the play proves funny and entertaining, it also marks an important step in the development of comic theory. Significantly, Goldsmith's play changed the face of comic theatre, eclipsing the popular sentimental comedy of the day, and inaugurated a new style of laughing comedy.

For those who believe the play's plot seems too far-fetched, Oscar James Campbell noted in an introduction to Chief Plays of Goldsmith and Sheridan: The School for Scandal, She Stoops to Conquer, The Rivals that the "central idea of She Stoops to Conquer was suggested to Goldsmith by an incident of his boyhood. He had been told that the house of a Mr. Featherstone was an inn and directed there for entertainment. Goldsmith, always easily deceived by a practical joke, had gone to the squire's house and treated him as a host. Out of this situation grew his characters and their games of cross-purposes." Other autobiographical elements in the play include resemblances between the young, vagabond Goldsmith who spent two years on a walking tour of Europe and the irresponsible, irrepressible Tony Lumpkin. Finally, Goldsmith, like his character Marlow, was at ease with serving women, but stiff in the company of proper ladies, in part because of insecurities about his physical appearance.