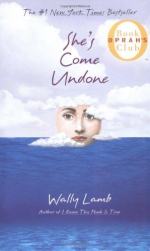 Wally Lamb
This Study Guide consists of approximately 39 pages of chapter summaries, quotes, character analysis, themes, and more - everything you need to sharpen your knowledge of She's Come Undone.

This detailed literature summary also contains Topics for Discussion and a Free Quiz on She's Come Undone by Wally Lamb.

Dolores remembers that she was four years old when her father gave in to the demands of Mrs. Masicotte to become her employee. He'd painted for her before that as a contractor. When he went to work for Mrs. Masicotte, he painted his truck peach, painted her name on the side, and began collecting rent on her properties on Saturdays. Dolores recalls that the watching television became her focal point and that she seldom wanted to do anything else. Television would hold her attention for years, often to the point of being destructive.

Dolores' life is a series of hurts and heartaches. Each time life hands her another problem, she seems to sink lower into her own pit of despair. It begins with the death of her baby brother, apparently during birth, which sends her mother into a deep depression. She only emerges after Dolores throws a fit, declaring that she hates her grandmother. Next comes her parents' divorce. Dolores blames her father, Tony, and can't forgive him for leaving them. Then Dolores' mother, Bernice, slips back into a serious breakdown and is hospitalized. Dolores goes to live with her grandma, Thelma Holland—the same grandma Dolores had declared she hated.

Bernice is eventually released from the hospital and the two live with Grandma. At thirteen, Dolores is raped by a man renting their upstairs apartment. Bernice comforts her by offering her any kind of food she wants and Dolores does little but eat and watch TV, quickly leading to serious obesity. Her guidance counselor, Mr. Pucci, wants her to go to college, and Bernice writes the essay that gets Dolores accepted. Before it is time for Dolores to go, Bernice is killed in a tragic accident. Dolores is devastated. She yells at her father at the funeral home and refuses to attend the service. Then she decides to go on to college because it was her mother's dream.

At school, Dolores is the focus of ridicule. A lesbian janitor tells Dolores she loves her and they have oral sex one night. Shortly after, Dolores kills the woman's fish and leaves town. She spends the next seven years in a mental care program.

While at college, Dolores' roommate, Kippy, got letters from her boyfriend, Dante. Dolores steals the letters and it's by chance that she discovers where Dante is teaching school. She arranges to rent an apartment across the hall from him and makes the move. They meet and Dolores is soon pregnant, but Dante pushes her into having an abortion. They marry, then Dante is fired from his teaching job, accused of an inappropriate relationship with a student. When Dolores arrives home early from work one day, she discovers the girl, undressed and on the bed with Dante.

Dolores' grandmother dies and she moves back to the old house where she reconnects with Mr. Pucci and Roberta, the tattoo artist who had lived across the street during Dolores' teen years. She eventually meets a man, Thayer, and the two marry. Though they are unable to have children, Dolores finally finds happiness—from within.