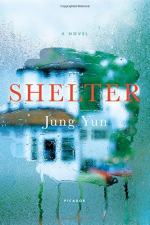 This detailed literature summary also contains Quotes and a Free Quiz on Shelter: A Novel by Jung Yun.

In the family drama Shelter: A Novel, a third-person limited narrator introduces protagonist Kyung Cho, who is married to Gillian and is the father of Ethan. Kyung is also the son of traditional Korean parents, Jin and Mae. Kyung cannot forgive his parents for the violence that ruled his childhood. Jin beat Mae for every infraction, and Mae beat Kyung because he was the only aspect of her life over which she had control. Though Korean tradition dictates how he should act as the son of the family, Kyung does not fulfill those duties. He barely has contact with his parents at all, but he deeply feels the effects of his failure on that front.

Kyung also has to face the fact that he is failing as a father. He has a strained relationship with Ethan and can seldom offer any words of kindness or praise. While he is careful not to physically abuse Ethan, he has virtually nothing to say to his son and is uncomfortable with his role as a father.

Kyung is a college professor and makes a decent living for his family. However, he and Gillian have made a series of poor decisions that have left them in a serious financial situation. They have reached their credit limit on most of their credit cards and are behind on most of their bills. Kyung is angry when Gillian decides they have to sell the house, but he does hope that the realtor will provide them with a way out of the worst of their situation. However, she suggests a selling price that is far less than they owe. Faced with yet another impossible situation, Kyung does not know what to do. He can look back at trips and purchases that brought them to this point, but when his marriage is also in trouble, his only answer is to suggest they take another trip – one they cannot afford.

On the day they meet with the realtor, Kyung discovers his mother, Mae, walking behind his house. Mae is nude and Kyung sees that she has been brutally beaten. His first instinct is that his father has returned to the habit of beating Mae, and he tells the police his theory. But when Kyung accompanies the police to his parents' home, they discover extensive damage and that Jin and the maid, Marina, have also been beaten. The story emerges that two brothers, Dell and Nate Perry, broke into the house and held them captive for days before one of the brothers overdosed and died.

Mae, Jin, and Marina move in with Kyung and Gillian. The house is filled to overflowing and Kyung struggles to manage his emotions. When Jin and Mae invite the extended family to their vacation home at the Cape, Gillian accepts it as a good idea. Kyung begs off, asking for time to finish some work at the office before joining them. Molly, a Korean woman he has known since they attended school together, arrives to drop off food for Jin and Mae. Kyung recounts her wild attitudes when they were young, and tries to seduce her. She responds, but then rushes away. Kyung heads directly to the Cape.

There, Kyung decides he is tired of hiding his true feelings. He goes on a tirade to his parents in front of all the guests, including Gillian, Ethan, and Gillian's father. The next morning, they discover that Mae has taken Kyung's car and crashed it, killing herself and Marina. When they find that Mae left a detailed list of her possessions along with who should get which items, it becomes clear that she committed suicide. Gillian does not speak to Kyung until after the funeral, when she reveals that she found Molly's underwear and demands that Kyung leave. She calls on Jin to pay off their credit card debts, which Kyung sees as a betrayal.

When the police capture Dell Perry, they learn that Jin's account of the attack was false. Mae had told Jin that she was moving out to follow her dream of becoming an interior decorator. Jin attacked her, prompting Mae to run out of the house where she encountered the Perry brothers, who were actually planning to rob another house in the neighborhood. Mae had literally begged them to come inside, believing they would save her from Jin's wrath. Kyung wants to kill Jin when he learns that Jin's violence had caused the entire situation, but he realizes that he will be changed for the rest of his life if he gives into his own desire for violence.