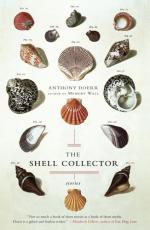 Anthony Doerr
This Study Guide consists of approximately 28 pages of chapter summaries, quotes, character analysis, themes, and more - everything you need to sharpen your knowledge of The Shell Collector.

Described and referred to collectively as “the Jims,” the two New York journalists representing some U.S. tabloid publication are thrust into the natural world of coastal Kenya by their work assignment. Heavy-set, out-of-shape, they lumber clumsily through the environment, ignorant of its risks. They represent a world that exploits the strangeness of an exotic place, distorting it for profit but not seeking to understand it. That they ask only some questions while avoiding other ones suggests that they investigate only up to their set boundaries of preconceived conclusions.

At the outset of the story, Josh, the idealistic, thirty-year-old son of the shell collector, has died of a cone shell sting. Reared by his mother, Josh joined the Peace Corps and stopped in Kenya to see his father en route to Uganda where he planned to begin his assignment. Described as a “goody-goody,&rdquo...

More summaries and resources for teaching or studying The Shell Collector.