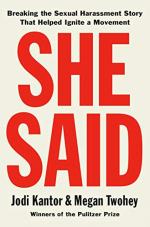 She Said Summary & Study Guide includes comprehensive information and analysis to help you understand the book. This study guide contains the following sections:

This detailed literature summary also contains Topics for Discussion on She Said by Jodi Kantor.

The following version of this book was used to create the guide: Kantor, Jodi, and Twohey, Megan. She Said. Penguin Random House LLC, 2019.

In She Said, Jodi Kantor and Megan Twohey write from an unbiased third person perspective as they recount the story of their investigative work to expose infamous movie producer Harvey Weinstein's decades of sexual misconduct, and reclaim the voices and stories of countless of his silenced victims.

After hearing rumors of Weinstein's misbehaviors from a range of sources, Jodi became eager to look deeper into Weinstein's past. In light of similar allegations against then-presidential candidate Donald J. Trump, and a recent exposé of Fox News host Bill O'Reilly, Jodi wondered if Weinstein's story might reveal similarly shocking patterns of behavior. After her colleague Megan Twohey returned from maternity leave, the two began to work more closely on following Weinstein leads, beginning with actress Rose McGowan. Though McGowan did not ultimately go on the record for the reporters’ original piece, she began their investigations into the Hollywood industry, assuring the reporters that the system only enabled powerful men like Weinstein.

Their conversations with McGowan, led Jodi and Megan to a range of other possible sources. Eventually they were in contact with several well-known actresses including Gwyneth Paltrow and Ashley Judd. Paltrow and Judd's accounts were disturbingly similar to McGowan's. The actresses then led them to Amy Israel, who put Jodi and Megan in contact with former Weinstein Company assistants, Zelda Perkins and Rowena Chiu, among others. The more women Jodi and Megan interviewed the more they began to realize how long Weinstein's behaviors had gone on. Each of the women recounted Weinstein's lewd comments, his habit of luring young women into his private hotel rooms, pressuring and threatening them into sexual favors at the expense of their careers and reputations. If the women did not comply or tried to later confront him for his abuse, he swiftly worked to silence them. Many had been forced to sign settlement contracts and take large sums of money in exchange for their silence.

Word of these settlements made Jodi and Megan increasingly interested in The Weinstein Company's deeper involvement in covering Weinstein's misconduct. Months of work led the reporters to contact several of Weinstein's lawyers, accountants, and executive board members. These interviews revealed that Weinstein indeed had help; though people across the company knew of Weinstein's abuse, they feared exposing and ruining the company's reputation, therefore agreeing to draw up the contracts as a means of erasing the accusations.

Jodi and Megan worked tirelessly to find evidence of these monetary agreements while also working to convince women to go on the record against Weinstein. Overwhelmingly the women feared what going public would mean for their careers, reputations, and wellbeing. Weinstein had already proved his power to ruin their lives and futures if they spoke out against them. Eventually Jodi's work with one of Weinstein's former accountants, Irwin Reiter, led her to former literary scout Lauren O'Connor's revealing memo. After repeatedly hearing of Weinstein's abuses, incidents similar to her own experiences with the producer, O'Connor wrote the memo as an attempted means of raising awareness for the company's toxic treatment of female employees. Though the memo was disappeared and O'Connor was forced into silence, Jodi used the report to substantiate much of the other evidence she and Megan had found.

In the days prior to publication, the Times asked Weinstein for a statement in response to the numerous allegations. Though he attempted intimidating and sabotaging Jodi and Megan's work, he ultimately denied responsibility and the piece went public. Jodi and Megan's work inspired the global #MeToo movement, empowering women worldwide to come out with their own stories of sexual abuse and violence.

In the months following, when psychology professor Christine Blasey Ford heard her former classmate Judge Brett Kavanaugh was Trump's nominee for the Supreme Court she felt the responsibility to reveal her own story of abuse; when she and Kavanaugh were teens, Kavanaugh violently assaulted Ford. With the encouragement of her lawyer Debra Katz, Jodi, and a group of friends, Ford ultimately came forward, even telling her story at the Congressional hearings in Washington, D.C. Despite the success of the #MeToo movement, the dismissal of Ford's story and Kavanaugh's continued rise to power proved that there was still much cultural and political reformation ahead.

A year after Jodi and Megan published their exposé, they organized a group interview at Gwyneth Paltrow's home, inviting many of the women involved in their reporting work to come together. Jodi and Megan wanted to know what the women's experiences were coming forward, to speak about the effect of speaking out and telling their stories. The intimate visit reminded all of the women the power of collectivity and solidarity, the importance of continued advocacy work.