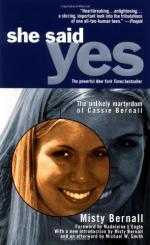 Misty Bernall
This Study Guide consists of approximately 17 pages of chapter summaries, quotes, character analysis, themes, and more - everything you need to sharpen your knowledge of She Said Yes.

She Said Yes: The Unlikely Martyrdom of Cassie Bernall Summary & Study Guide includes comprehensive information and analysis to help you understand the book. This study guide contains the following sections:

This detailed literature summary also contains Topics for Discussion on She Said Yes: The Unlikely Martyrdom of Cassie Bernall by Misty Bernall.

In She Said Yes by Misty Bernall, a mother writes about her daughter who was killed in the Columbine High School massacre. She reflects on the life of her daughter and remembers how Cassie broke the bonds of Satan worship. In the end, she was killed after professing her allegiance to God.

The morning of April 20, 1999, seemed like every other school morning. Misty got her kids up then went to work. At lunchtime she heard that there was trouble at the school. Two gunmen had gone on a rampage, setting off bombs and shooting students in the school.

The parents were sent to two different locations as they waited to hear news regarding their children's safety. Many were sent to Leawood Elementary School, and when that was too crowded, the rest were sent to the public library. Chris, Misty and Brad's son, showed up in the early afternoon, but they had no news of their daughter Cassie. Misty refused to believe that her daughter was dead until the coroner's office called them the next evening.

Misty reflected on their daughter's life. Brad hadn't been ready for children when Misty became pregnant. The moment his daughter was born, his heart changed. He loved her incredibly, and as Cassie grew, she followed him everywhere. Around fifth grade, she started to change from the happy child they knew. She let go of her old friends and remained close to a girl named Mona.

In 1996, Misty found letters Mona and Cassie had written. They were filled with hate talk, satanic symbolism and suggestions of murder. Fearful, she and Brad turned to professionals for help. They enrolled Cassie into a new school and got a restraining order against Mona. Cassie was under strict surveillance, and the only activity in which she could participate in was youth group. This made her very angry, and she threatened to run away or commit suicide. Mona and another friend kept trying to contact her so the family moved.

In 1997, a girl named Jamie who had befriended Cassie invited her to go on a trip with the youth group to Estes Park. In spite of her parent's reservations, Cassie went on the trip. While she was there, something reached through to her, and she decided to give her life to God. When she got home she told her parents that she changed. At first, her mother didn't believe her, but over time she realized something really had changed in her daughter.

Cassie seemed less worried and more peaceful. She didn't run around preaching to everyone, but she made changes in her own life. After a while, she asked her parents to transfer her to Columbine. A friend of hers attended there. They let her go there as long as she didn't hang out with a bad crowd and as long as she kept her grades up. It was at this school that she was asked whether she believed in God. She was shot at close range after answering "yes."

More summaries and resources for teaching or studying She Said Yes: The Unlikely Martyrdom of Cassie Bernall.