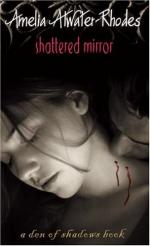 Amelia Atwater-Rhodes
This Study Guide consists of approximately 31 pages of chapter summaries, quotes, character analysis, themes, and more - everything you need to sharpen your knowledge of Shattered Mirror.

This detailed literature summary also contains Topics for Discussion and a Free Quiz on Shattered Mirror by Amelia Atwater-Rhodes.

Sarah Vida is a vampire hunter by night but carries on the semblance of a normal teenager during the day. She attends school and has just been forced to change schools as the story opens. Sarah has gone alone into a den of vampires and been injured, prompting a visit to a healer, Caryn Smoke. Caryn warns Sarah that there are vampires at her new school in Action, Massachusetts, but assures her that they are living a peaceful lifestyle. Sarah promises that she won't start any fights with any of the vampires who are attempting to live peacefully. She soon meets a pair of vampires that she initially believes to be twins, Christopher and Nissa, but later learns that Christopher is actually the twin of the famous vampire, Nikolas, and Nissa is their older sister.

Sarah constantly feels inferior to her mother and sister, both who are famous and seem to be perfect vampire hunters. As her friendship with Christopher and Nissa grows, Sarah knows her mother would greatly disapprove. She comes to realize she's going to have to tell Christopher and Nissa the truth about her family and dreads it because she has come to regard them as friends. Then Sarah learns that Nissa was changed to a vampire by force and that she chose to change Nikolas because he was about to be executed and she wanted to save him. Nikolas changed Christopher. Nikolas spirals out of control while Christopher and Nissa try to live peacefully.

Sarah also discovers a young student named Robert is seeking revenge on the vampire who bonds to his sister. Robert gives Sarah some valuable information and she zeroes in on Nikolas and then discovers that he is Christopher's identical twin that Nissa had told her about. Sarah puts herself in danger in an effort to kill Nikolas but is injured for her efforts. Sarah later finds another of the famous vampires, Kaleo, and discovers he's not as evil as she had initially believed.

As the story comes to a climax, Sarah finds herself fighting Christopher and Nikolas. Sarah is unable to win against the pair who fight as if they are of a single mind. Sarah eventually falls to their strength and both bite her neck. They take only a little of her own blood but Christopher then cuts a small gash in his own throat and Sarah, weakened and under the control of the combined minds of the twins, is unable to resist. She sucks at his blood and then repeats at Nikolas's throat.

Adianna, Sarah's older sister, finds Sarah and knows she's too near death to save. Christopher arrives and admits that he'd lost control during the fight. Both Christopher and Adianna know the only way to save Sarah's life is to turn her into a vampire and Christopher does this as Adianna leaves. Sarah wakes and knows that she will now be battling her family and that the honorable thing would be to kill herself, but she doesn't. She also refuses to remain with Christopher, saying she has to find her own way to live.

More summaries and resources for teaching or studying Shattered Mirror.