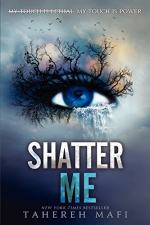 Tahereh Mafi
This Study Guide consists of approximately 111 pages of chapter summaries, quotes, character analysis, themes, and more - everything you need to sharpen your knowledge of Shatter Me.

Shatter Me Summary & Study Guide includes comprehensive information and analysis to help you understand the book. This study guide contains the following sections:

This detailed literature summary also contains Quotes and a Free Quiz on Shatter Me by Tahereh Mafi.

"Shatter Me" is the story of Juliette Ferrars, a girl with a most unusual ability as her touch can be dangerous and deadly. She has been incarcerated for a crime she accidentally committed. She is recruited for the current government's diabolical plans against her will, forcing her to learn how to be brave and face her own fears while finding love along the way. This is the story of a girl isolated in a futuristic society who breaks free of her bonds and learns how to fight for what she believes in.

Juliette Ferrars is a young girl who is trapped in a prison cell for a crime she accidentally committed a few years ago. Just as she thinks she is going crazy from being alone for so long, the guards inform her that she is getting a cell mate. At first Juliette is excited about this, but her excitement turns to dread once she learns that the cellmate is a young man. The young man's name is Adam, and Juliette cannot figure out where she already knows him from. At first, Juliette is afraid of him especially after he takes her bed and blanket, leaving her to sleep on the floor. The next day, their attitudes towards one another soften as Adam burns his hand on a plate of food and Juliette begins showing him how to acclimate to living in the facility.

Over time, their relationship grows. Juliette continues showing him things such as how to take a quick shower. Adam returns Juliette's bed and blankets once he sees that she is cold. Juliette still cannot stop thinking that she knows this man from somewhere in her past, but she does not ask him about it. After some time of living together, the soldiers come in to take Juliette away. Adam is revealed to be a soldier himself who was planted in Juliette's cell as a spy. Juliette is taken to Sector 45, a community under the rule of The Reestablishment, the governing political regime. She is taken to Warner, the leader of Sector 45 who has an offer for Juliette. He wants her to work with him using her deadly touch on rebels in exchange for a life full of riches and freedom. The idea is horrifying to Juliette, but Warner wants her to get a taste of what she could have and orders that she live in his compound. He also orders Adam to be her personal guard while she is there.

Adam takes Juliette to the compound where she is given a large bedroom with a closet full of the best kind of clothes. Adam tells Juliette that she should change into one of the dresses for dinner. He also hints that there are no cameras in the bathroom. Juliette refuses to dress up for dinner. Warner is disappointed in this but he is thrilled that Juliette is finally with him. Later, Juliette finds out that Adam has been beaten for Juliette's refusal to cooperate with Warner. As Juliette decides to cooperate and wear some of the clothes in the closet, she finds the notebook that she had in her cell. Adam kept it and hid it in the closet for Juliette with a note that shows that he is really trying to help her. Adam is moved in with Juliette again where they have a chance to start a romantic relationship and Juliette learns Adam can touch her without getting hurt.

Warner continues to get Juliette on his side, telling her how much she is needed by him. She is still disgusted by his actions, especially when he orders one of his own men to touch Juliette and when Warner executes one of the soldiers for giving food to rebels. This disgust turns into sheer hatred when she is forced to touch a toddler during a sadistic experiment ordered by Warner. As Adam and Juliette's relationship develops, they formulate a plan to escape. This is enacted earlier than they had planned as Warner conducts a drill. During the escape, Warner is able to touch Juliette himself without getting hurt. Adam takes Juliette to a nearby nuclear field where he has hidden a tank. Using the tank, they are able to get to Adam's home.

Juliette is introduced to Adam's younger brother James, who has been living in Adam's home by himself. After James goes to school one morning, a soldier named Kenji shows up and is badly injured. He has been tortured and shot by Warner's men in an attempt to get information about Adam. Kenji has come to warn Adam and get him, Juliette, and James to a safe place. Shortly afterwards, the soldiers show up at Adam's home and they are forced to flee. Kenji cannot run, so Adam hides him and James in an abandoned building to hide until he can steal a car with Juliette. Kenji sedates James to keep him from worrying too much about the situation. As soon as they run out of the building they are caught by Warner and his men and Adam is shot.

Juliette is dragged off to another building where Warner professes his love for Juliette and his excitement over being able to touch her without injury. Juliette is able to use his sexual advances against him to steal his gun and shoot him. Juliette then goes to find Adam, who is badly injured as well and is hanging by his arms. Once he is set free he tells Juliette that Warner was planning on torturing him to death after he has had his way with her. The pair are able to steal a car as all of the soldiers have gone to help Warner. Juliette and Adam pick up Kenji and James and head to the safe haven that Kenji had mentioned.

Once at the facility, Adam is immediately taken to the medical wing. Juliette is furious and frantic, causing Kenji to sedate her as well. Once she wakes up, she finds herself wrapped up in a sheet with nothing else on. A tall blonde man enters and tries to ask her questions, but she wants to see Adam and James to make sure they are alright. Kenji comes in and assures Juliette that they are safe and lets her know that the facility's leader wants to meet her. He tells her that they have spent time and research trying to find her. Kenji finds Juliette some clothes after a brief argument with the blonde man, who is offended by Juliette's nickname for him and tells Juliette that his name is Winston. After Juliette gets dressed, Kenji and Winston take Juliette to see Castle, the leader of area.

Castle informs Juliette that this place is called Omega Point. It is a safe haven for people who have special abilities and that she is one of 56 people who are gifted. He himself has the gift of telekinesis and he would like for Juliette to become part of the rebellion against The Reestablishment. Juliette meets others who have a special ability and finds out that Kenji has the ability to become invisible and Winston can bend and stretch in any way that is needed. She is also reunited with Adam as he has been quickly healed. The next day, Winston gives Juliette a suit, boots, and gloves made of a material that will allow her to touch others. Armed with these items and having found a place where she is both loved and respected, Juliette no longer thinks of herself as a monster and is ready to fight for what she believes in.

More summaries and resources for teaching or studying Shatter Me.

Shatter Me from BookRags. (c)2022 BookRags, Inc. All rights reserved.