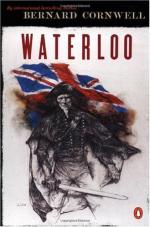 This detailed literature summary also contains Topics for Discussion and a Free Quiz on Sharpe's Waterloo: Richard Sharpe and the Waterloo Campaign by Bernard Cornwell.

SHARPE'S WATERLOO by Bernard Cornwell is an account of the four days in June 1815 when the allied armies under the Duke of Wellington confronted the Emperor Napoleon as he and his troops marched on Brussels, the capital of Belgium. The story is told through the eyes of Richard Sharpe, a veteran British army officer who has been seconded to the staff of the young Prince of Orange.

Bloodied and disheveled from a fateful encounter with a young French cavalry officer in the vanguard of Napoleon's forces, Sharpe bursts into the Duchess of Richmond's ball in Brussels to tell the Duke of Wellington of the arrival of the French army just south of Brussels. As he leaves the ball Sharpe comes on young Lord Rossendale, who is Sharpe's estranged wife's lover. He is prevented from killing him by fellow officers and a duel is agreed upon, but it never takes place because their personal affairs are overtaken by, first the battle for Quatre Bras, and then the main battle at a place called Mont-St-Jean just south of Brussels close by the village of Waterloo.

Sharpe, in his role of a staff officer to the Prince of Orange, witnesses the fierce fighting when the British army and their allies prevent the French forces from controlling the crossroads at Quatre Bras. The next day, Sharpe follows Wellington and his troops when the Duke has to make a strategic retreat back to Mont-St-Jean because of the defeat and retreat of the Prussian armies.

During the battle of Waterloo, Sharpe, appalled at the meddling incompetence of the Prince of Orange, rejoins his old regiment, the Prince of Wale's Own Volunteers and at the climax of the battle takes control from its dysfunctional commander and leads it in the rout of the Imperial Guard. In the aftermath of the battle, Sharpe, who has been officially put in charge of his old regiment by the Duke of Wellington, learns of the death of Lord Rossendale who took part in the charge of the British Heavy cavalry under the Earl of Uxbridge.

The day after the battle, Sharpe and his long time comrade-in-arms Patrick Harper survey the destruction and carnage of the battlefield. Harper will return to his wife in Ireland and Sharpe will return to his love, Lucille, and join her on her farm in Normandy. Europe is finally freed from the threat of a new Napoleonic empire.