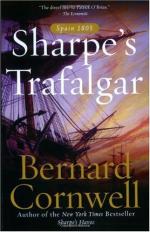 Bernard Cornwell
This Study Guide consists of approximately 30 pages of chapter summaries, quotes, character analysis, themes, and more - everything you need to sharpen your knowledge of Sharpe's Trafalgar.

This detailed literature summary also contains Topics for Discussion and a Free Quiz on Sharpe's Trafalgar: Richard Sharpe and the Battle of Trafalgar, October 21, 1805 by Bernard Cornwell.

Ensign Richard Sharpe purchases items to make his journey from India to Britain more comfortable but the warehouse where the goods are stored burns down before he can collect them. Sharpe, acting on a tip, discovers that the merchant—who reportedly died in the fire—is alive and well. He confronts the man and, in the act, saves a British Captain, Joel Chase. The men strike up a friendship before Sharpe leaves for Britain aboard the Calliope, captained by Peculiar Cromwell.

Another couple, Lord William and Lady Grace Hale, are also on board. Though Lord William has nothing but scorn for Sharpe, Lady Grace soon falls in love with him and the two begin an affair. The Calliope breaks away from the convoy of ships and is captured by a French ship, the Revenant. Sharpe believes that Cromwell has put the ship in a position to be captured and that others on board are in on the plot. Just days later, Chase's ship, the Pucelle, catches up to the Calliope and retakes it. Chase invites Sharpe to join him on the Pucelle, an invitation Sharpe accepts after learning that Lady Grace and Lord William will also be changing ships.

A short time later, Chase spots the Revenant. Just as the Pucelle is in a position to catch up with her, Chase discovers other British ships in the area and learns that there is a battle expected. He gives up the chase of the Revenant to join the upcoming battle. As a military man, Sharpe is expected to participate in the fighting. Fearing what might happen if the ship is taken by the enemy, Lady Grace asks for a gun and Sharpe gives her his. The battle rages and many lives are lost. Chase and Sharpe come through without major injuries. There are many ships from both sides but the majority of the French ships focus on the Victory, the ship carrying the British admiral.

The Pucelle winds up in a fight with the Revenant and wins, taking that ship as their prize. Meanwhile, Lord William and Lady Grace are hiding in the hold of the ship. Lord William reveals that Braithwaite left a letter outlining the affair between Lady Grace and Sharpe. Lord William makes it plain that he is about to kill Lady Grace. Lady Grace kills him with Sharpe's gun. Sharpe enters the hold and discovers the death. Lady Grace says that she knows she will be hanged for murder but Sharpe, with the help of a seaman named Clouter, disposes of the body. Sharpe and Lady Grace, who has by this time told Sharpe that she is pregnant with his child, discuss their future together.

More summaries and resources for teaching or studying Sharpe's Trafalgar: Richard Sharpe and the Battle of Trafalgar, October 21, 1805.