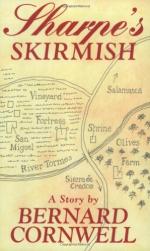 Bernard Cornwell
This Study Guide consists of approximately 26 pages of chapter summaries, quotes, character analysis, themes, and more - everything you need to sharpen your knowledge of Sharpe's Skirmish.

This detailed literature summary also contains Topics for Discussion and a Free Quiz on Sharpe's Skirmish by Bernard Cornwell.

"Sharpe's Skirmish" by Bernard Cromwell is a story written about a battle between the English and the French in 1812. In order to secure a path for Wellington's army to reach their supplies, Captain Richard Sharpe and his men must retain control of the fort at San Miguel de Tormes, even when the French attack with General Jean Herault leading them. "Sharpe's Skirmish" provides an interesting fictional account of one aspect of this important historical war.

When Captain Richard Sharpe arrives at the fort at San Miguel, he orders Sergeant Harper to destroy all of the wine bottles stored in the fort to prevent his men from becoming drunk and useless should they be attacked. Major Tubbs worries about the French attacking, especially when a group of unfriendly-looking horsemen approach the fort, but Sharpe recognizes their leader as Teresa, his wife. Since the French are losing to the English in Spain, Major Ducos petitions Marshal Soult for soldiers to send North to assist Marmont's men by attacking the English at San Miguel. During dinner, MacKeon mentions being at Gawilghur with Sharpe before Sharpe checks on the sentries. Sharpe assures Harper that this is supposed to be an easy mission, but he is plagued with a feeling of unease. Herault impresses Ducos by formulating a plan to distract the English by sending a decoy mission to Avila, allowing the rest of the French troops to sneak through the mountains to San Miguel.

When Sharpe hears that the French are planning to attack Avila, he disbelieves the rumor, and suspecting they will attack San Miguel, he prepares his troops but will not send a false alarm to Salamanca. Since it is impossible for all of the French troops to reach San Miguel in time, Herault sends Pailleterie with 100 men ahead, promising to join them around midday. At Teresa's insistence, Sharpe has Hickey prepare a summons for reinforcements in case the French attack. Though he is prepared, he still feels like something is wrong. Pailleterie and his men head toward San Miguel. At dawn, as Sharpe begins to feel foolish for fearing an attack, the French forces arrive and take control of the fort as Teresa rides to Salamanca to summon reinforcements. After acquiring the fort, Pailleterie hangs the French battlements and settles in to wait for Herault and the remaining French troops.

Upset at losing the fort, Sharpe follows MacKeon's advice to find a back way in, locating a crack in the wall of the fort where he starts a fire that forces the French from the fort. Pailleterie's men and Sharpe's men fight, and once Sharpe regains the fort, he is bewildered to see the arrival of more French forces. When Herault arrives at San Miguel to see his men being defeated by the English, he commands his dragoons to open fire. Again adhering to MacKeon's suggestion, Sharpe orders his men to construct makeshift caltrops by breaking wine bottles on the bridge, and these caltrops prevent the French from crossing the bridge. In the ensuing encounter, Sharpe takes Herault as a prisoner. Teresa soon arrives with the reinforcements from Salamanca, but they are not needed. When he arrives that evening, Ducos is angry at Herault's loss. Sharpe is relieved that he won the skirmish at San Miguel, assuring the stability of his career for the time being.