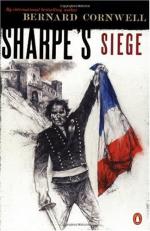 Bernard Cornwell
This Study Guide consists of approximately 40 pages of chapter summaries, quotes, character analysis, themes, and more - everything you need to sharpen your knowledge of Sharpe's Siege.

This detailed literature summary also contains Topics for Discussion and a Free Quiz on Sharpe's Siege: Richard Sharpe and the Winter Campaign, 1814 by Bernard Cornwell.

Major Richard Sharpe takes command of three companies of men during a diversionary attack on a French fortress and environs. Under Sharpe's resolute leadership the men fight a series of engagements with decisive results until falling back on a largely-destroyed fortress where they discover they have been abandoned. They defend the fortress during a bloody but abbreviated siege that ends in an unusual surrender.

Sharpe is summoned by Colonel Wigram and Colonel Elphinstone and given a new command. He is to land a small contingent of British army forces on the French coast and capture a poorly-defended fortress. Sharpe is then to lead his men inland toward Bordeaux where it is supposed the local populace will rise in rebellion against Napoleon. Privately, Elphinstone cautions Sharpe against the mission and urges him not to become entangled in a fool's errand to Bordeaux. Sharpe and his forces are conveyed to France by Captain Horace Bampfylde's squadron. At the last moment, Sharpe is joined by Comte de Maquerre, a Frenchman serving in the British army.

Sharpe's mission is complicated by several things, including his wife's sickness on the morning of his departure, de Maquerre's voluble insistence that Bordeaux is teetering on the edge of rebellion, and Bampfylde's inexperienced optimism of the possibilities of land-based warfare. Further, it gradually develops that the entire mission is based around the fallacy that the marines, due to widespread illness, were not available to capture the fortress. In fact, the marines land in force and Bampfylde directs Sharpe to proceed on his dangerous fool's errand—a march to Bordeaux to incite rebellion.

Sharpe begins his journey but quickly discovers all is not right. Bampfylde leads the marines in a bumbling march that fails to keep schedule with a naval attack on the fortress. Sharpe diverts his own march to quickly capture the fortress as the naval attack wanes. He also dispatches men to warn Bampfylde that Bampfylde is marching the marines into an ambush, and then maneuvers his men such that a counter-attack of the enemy troops waiting in ambush is possible. Only then does Sharpe begrudgingly set off toward Bordeaux.

On the road to Bordeaux, Sharpe's troops encounter and overcome a French contingent. Next they meet de Maquerre, putatively returning from Bordeaux, who claims the city has rebelled and Sharpe must hurry on his way. De Maquerre, however, is a French spy—Bordeaux has not and will not rise in rebellion. As Sharpe vacillates, de Maquerre returns to Bampfylde's position and reports Sharpe's troops completely annihilated. Bampfylde, fearing a strong French counterattack, abandons his position and returns home. Sharpe returns the next day only to find the rendezvous deserted—and to deduce he has been abandoned. He assumes a defensive position in the now-ruined fort and resists a bloody but concise assault by French forces before surrendering to an American privateer. The unorthodox maneuver allows his men to board the American ship and avoid French capture. In exchange for certain privileges, the American Captain Cornelius Killick later sets Sharpe and his men ashore and at liberty. Sharpe's forces march south and rendezvous with the main British invasion forces. Sharpe encounters and kills a surprised de Marquerre and then learns that his wife Jane has recovered her health.

More summaries and resources for teaching or studying Sharpe's Siege: Richard Sharpe and the Winter Campaign, 1814.