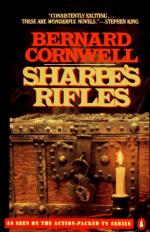 This detailed literature summary also contains Topics for Discussion and a Free Quiz on Sharpe's Rifles: Richard Sharpe and the French Invasion of Galicia, January 1809 by Bernard Cornwell.

Sharpe's Rifles is a novel in a series that tells the stories of the daring adventures of British Army soldier Richard Sharpe. This novel is set early in the British involvement in the Peninsular War of the Napoleonic Wars of the nineteenth century. The story begins in the winter of 1809.

Don Blas Vivar leads a group of Spanish cavalry called Cazadores. They are being pursued by a French colonel commanding a force of French cavalry. Also pursuing Vivar is a Spanish civilian who knows the contents of the strongbox Vivar guards and Vivar's intended destination. The French colonel has orders from Napoleon himself to capture the strongbox.

Lieutenant Richard Sharpe is a British soldier who has been promoted from the enlisted ranks to officer. This is an unusual practice in the British Army at the time, and Sharpe's promotion causes resentment from other officers and enlisted men alike. Sharpe's commanding officer dislikes him and assigns him to administrative roles, but due to the incompetence of the commanding officer, a group of infantry get cut off from the rest of the British Army, and Sharpe finds himself in command of a group of elite troops who do not respect his authority.

In an effort to rejoin the rest of the British Army, Sharpe decides to take his men on a long march to Lisbon. The troops believe this is the wrong course of action, and they mutiny. They send Patrick Harper, a large and strong Irishman, as their representative. Sharpe and Harper fight and are on the verge of killing each other when Vivar encounters the British soldiers and stops the fight.

Sharpe agrees to join forces with the Spanish under the command of Vivar, and in doing so Sharpe and his riflemen become involved in Vivar's plans to capture a Spanish city and perform what many will regard as a miracle. Vivar believes this will inspire the Spanish people to resist the invading French forces and eventually allow the Spanish military to expel the French from Spain. While cooperating with Vivar, Sharpe meets Louisa Parker a beautiful nineteen-year-old English woman, and though he tries to stay focused on leading his men, Sharpe falls in love.

Shortly after meeting Louisa's family, Sharpe discovers that Vivar has intentionally deceived him in order to get his help. The two men argue and almost fight before a priest stops the altercation. Sharpe separates his forces from Vivar's and resumes his journey to Lisbon. Louisa's family goes along, and the troops make good progress south until they are overtaken and trapped in a farmhouse by a much larger force of French cavalry.

During the time that Sharpe's men are trapped in the farmhouse, Sharpe meets Colonel de l'Eclin, a cavalry officer with a brilliant tactical mind and a record of extreme cruelty. Sharpe refuses de l'Eclin's demand for surrender, and just as it appears that the British soldiers will be annihilated, Vivar reappears and rescues the British. Once again Sharpe joins Vivar, and the two embark on a mission to capture the city of Santiago de Compostela and perform a miracle.