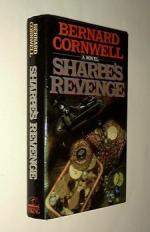 Bernard Cornwell
This Study Guide consists of approximately 27 pages of chapter summaries, quotes, character analysis, themes, and more - everything you need to sharpen your knowledge of Sharpe's Revenge.

Sharpe's Revenge: Richard Sharpe and the Peace of 1814 Summary & Study Guide includes comprehensive information and analysis to help you understand the book. This study guide contains the following sections:

This detailed literature summary also contains Topics for Discussion and a Free Quiz on Sharpe's Revenge: Richard Sharpe and the Peace of 1814 by Bernard Cornwell.

Major Richard Sharpe continues his military career during the invasion of France, participating in the siege of Toulouse, until Napoleon abdicates. Sharpe is then embroiled in legal troubles stemming from a plot hatched by his rival Pierre Ducos. Sharpe travels over much of France and to the Kingdom of Naples to hunt down Ducos, exact his revenge, and clear his good name. In the process, his marriage to Jane dissolves and his Friendship with William Frederickson is ruined.

The novel is divided into four Parts, each Part comprising several chapters. The various Parts serve to construct an overarching narrative that, in many respects, is episodic. Part I deals with Sharpe's military career and his decision to remain in France and fight against Napoleon's forces rather than resigning his commission and retiring to England with his wife Jane. As Jane returns home, Sharpe joins a newly-formed British group that marches on the French city of Toulouse. In an aggressive and costly assault, Toulouse is captured and hours later the news arrives that Napoleon had abdicated some days previous. The war over, the British forces begin reorganization and departure for home. Sharpe's visions of an idyllic retirement are quickly shattered, however—he has been accused of stealing Napoleon's treasure from the Teste de Buch, a fortress he captured prior to the opening of the current novel.

In Part II the charges are considered. They are entirely fabricated by Major Pierre Ducos, a French intelligence officer with a personal hatred for Sharpe. In fact, Ducos has stolen the money and framed Sharpe and Frederickson for the crime. The two men decide their only hope lies in finding Henri Lassan, the one-time commandant of the fortress, and securing his testimony in their behalf. To this end they escape and travel across France. Meanwhile, Ducos leads men to Lassan's estate and they brutally murder the man.

Back home in England, Jane becomes disillusioned with the life of a military wife and begins a scandalous affair with a penniless but somewhat influential lord. Sharpe and Frederickson finally arrive at Lassan's estate only to receive a surprising welcome—Lucille views them as brigands and shoots Sharpe, inflicting severe wounds. Part III sees Jane's affair become quite public even as first Frederickson and then Sharpe fall in love with Lucille Lassan, Henri's younger sister and now head of the family estate. Lucille rebuffs Frederickson's early marriage proposal causing him to leave the estate and travel to Paris where he searches the national archives and manages to locate Ducos' hiding place in the Kingdom of Naples. Sharpe continues to recuperate and begins a romantic love affair with Lucille, leaving her pregnant as he eventually travels to Paris to join Frederickson.

In Part IV, the two British soldiers travel to the Kingdom of Naples and join forces with General Calvet, a one-time opponent and Napoleon loyalist, who is seeking to recover Napoleon's fortune for the exiled tyrant. The small band besieges Ducos' estate, seize the treasure and Ducos, and make a daring escape from Neapolitan forces. Sharpe finally informs Frederickson of his love for Lucille and the two men part ways with antipathy. Sharpe then returns to Lucille's estate to pursue the unlikely life of a French farmer.

More summaries and resources for teaching or studying Sharpe's Revenge: Richard Sharpe and the Peace of 1814.

Sharpe's Revenge: Richard Sharpe and the Peace of 1814 from BookRags. (c)2022 BookRags, Inc. All rights reserved.