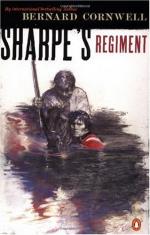 Bernard Cornwell
This Study Guide consists of approximately 40 pages of chapter summaries, quotes, character analysis, themes, and more - everything you need to sharpen your knowledge of Sharpe's Regiment.

This detailed literature summary also contains Topics for Discussion and a Free Quiz on Sharpe's Regiment by Bernard Cornwell.

Major Richard Sharpe loves his military unit the South Essex Regiment. He, Regimental Sergeant Major Patrick Harper, and others find the South Essex the closest thing to a home that they know. But warfare in Spain between England and Napoleonic France has taken its toll on the South Essex and the first battalion (that portion of the unit engaged in overseas combat) has lost so many men that it is scarcely a viable fighting force. A second battalion has been established in England to recruit and train replacements, but after many months no replacements have arrived in France. Sharpe, Harper, and a few others are returned to England to track down the second battalion, ascertain why it is not delivering replacements, and correct the situation.

In England, Sharpe quickly determines that the second battalion is in fact actively recruiting men, but instead of sending those men to the first battalion, corrupt second battalion commanders are selling the new recruits to the highest bidder—an illegal but fairly common process known as crimping. The second battalion draws rations and pay for the recruits but they do not receive it. Instead, they are marches to an islet ironically named Foulness where the martinet Lieutenant Colonel Bartholomew Girdwood trains them. Girdwood is protected by Sharpe's long-time nemesis Sir Henry Simmerson, who in turn derives political protection from Lord Simon Fenner, the Secretary of State at War. Sharpe's initial forays into a political solution are clumsy and easily deflected, leading only to an assassination attempt. Determined to resolve the situation at any cost, Sharpe and Harper travel through the countryside incognito until they locate a second battalion recruiting party led by the colorful Sergeant Horatio Havercamp and sign up as new enlistees. They are marched to Foulness and begin basic training, finding the place run by the sadistic Girdwood as a mix between a formal training ground and a prison. Men who attempt to assert their rights are murdered or even sometimes hunted as human prey. Sharpe and Harper gather intelligence and escape, only to discover that in London their personal testimonies are worth little pitted against Fenner's considerable political influence.

Simmerson's young and beautiful niece, Jane Gibbons, is also aware of the corruption and while a romantic relationship between Jane and Sharpe begins against a backdrop of Sharpe's investigative actions, Jane vows to secure documentary proof of her tyrant uncle's abuses. However Jane proves incapable of locating the ledger books and Sharpe ultimately resorts to a grandstanding maneuver during a Royal Parade to attempt to catch the Royal attention. In this he fails and faces an unsympathetic court of review. Fortunately for Sharpe the proceedings are interrupted by Anne Camoynes, a political enemy of Fenner who has befriended Sharpe due to their common interests. Anne provides the documentary proof of Fenner's corruption and a political deal is arranged whereby all parties are satisfied. Sharpe and Jane become engaged and Sharpe returns to Spain accompanied by the men of the second battalion who swell the South Essex's ranks and put the regiment back into fighting shape.

More summaries and resources for teaching or studying Sharpe's Regiment.