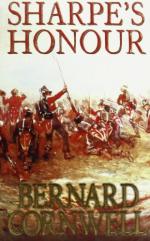 What is Sharpe's concept of honor? Why doesn't he sign the parole? Would it have made anything easier for him?

La Marquesa is very concerned about her wagons and wealth. Does she really love Richard Sharpe? Does she love anyone?

Discuss the three villains and how they interconnect. Does El Matarife get what he deserves?

Major Sharpe admittedly got himself into this whole mess with the duel. Why did he decide to fight the Marques?

Why does Wellington save Sharpe from being hanged?

How does Sharpe eventually escape from Burgos? How does he make it back to the British army?

What is Father Hacha's excuse for holding La Marquesa's wagons?

How was Wellington's plan to defeat the French? Why does he continue to throw troops at the front, where they are cut down by French guns?