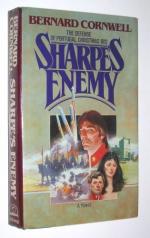 Plot Summary
+Chapters Summary and Analysis
Prologue and Chapters 1 and 2
Chapters 3 through 8
Chapters 9, 10, and 11
Chapters 12 through 17
Chapters 18 through 23
Chapters 24 through 30 and Epilogue
Free Quiz
Characters
Objects/Places
Themes
Style
Quotes
Topics for Discussion
Order our Sharpe's Enemy: Richard Sharpe and the Defense of Portugal, Christmas 1812 Study Guide

Bernard Cornwell
This Study Guide consists of approximately 30 pages of chapter summaries, quotes, character analysis, themes, and more - everything you need to sharpen your knowledge of Sharpe's Enemy.

This detailed literature summary also contains Topics for Discussion and a Free Quiz on Sharpe's Enemy: Richard Sharpe and the Defense of Portugal, Christmas 1812 by Bernard Cornwell.

It is Christmas, 1812, and the British Empire is at war with Napoleonic France. The British forces have invaded Spain through Portugal and against all predictions have gained a toehold on the continent. The French prepare to launch a surprise counterattack and major diversionary raid. Meanwhile, Richard Sharpe is promoted to major and placed in charge of various training details during the winter lull of fighting. Sharpe's command is saddled with a rocket artillery battalion—a new-fangled weapon that most soldiers predict will be an abject failure. Close by, a rag-tag army of deserters from various armies invades the small town of Andrados and holds the locals hostage. They also capture several society ladies who happened to be in town on a religious pilgrimage. Sharpe is ordered to secure their release. Along with Sergeant Patrick Harper, Sharpe travels to Andrados with ransom funds. In Andrados the funds are taken, but the society lady hostages are not released. Sharpe scouts the area and is disgusted to learn that his old nemesis, Obadiah Hakeswill, is one of the rag-tag army's commanders. Sharpe returns to base and delivers the news; he is thereafter ordered to take a force of men and capture Andrados by force.

Sharpe returns to Andrados with British soldiers, taking William Frederickson as a subordinate officer, and supported by the slow-moving rocket artillery. Sharpe and Harper sneak into the enemy's position and secure the hostages' safety while Frederickson attacks in force and captures an outlying building. The rocket artillery arrives along with Lord Farthingdale, an incompetent coward who considers himself a great military leader. Farthingdale assumes command and launches a disastrous assault on an enemy-held strongpoint. Sharpe intervenes and turns the British rout into a victory. The rag-tag army is thus defeated, but then the French appear in force. Farthingdale plans to simply retreat but is convinced by Sharpe to leave; command reverts to Sharpe. Over the next day and a half, Sharpe uses a variety of stratagems and brilliant tactics to hold off a much larger French attacking force until reinforcements arrive. The rocket artillery is used to much effect and Sharpe is victorious. However, during the combat the vile Hakeswill has eluded final capture and manages to murder Sharpe's beloved wife, the partisan leader Teresa. Finally brought to justice, Hakeswill is executed by firing squad while Sharpe coldly watches.

More summaries and resources for teaching or studying Sharpe's Enemy: Richard Sharpe and the Defense of Portugal, Christmas 1812.