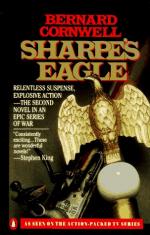 Bernard Cornwell
This Study Guide consists of approximately 35 pages of chapter summaries, quotes, character analysis, themes, and more - everything you need to sharpen your knowledge of Sharpe's Eagle.

This detailed literature summary also contains Topics for Discussion and a Free Quiz on Sharpe's Eagle: Richard Sharpe and the Talavera Campaign July 1809 by Bernard Cornwell.

Sharpe's Eagle is a novel set during the Peninsular War, a part of the Napoleonic Wars. The novel opens in July 1809. The title refers to Richard Sharpe, a British soldier, and his quest to capture the standard of a French military unit, a gilded eagle.

The novel opens with Lieutenant Sharpe being tended by his friend and sergeant, Patrick Harper. Sharpe had been wounded by a French cavalryman in a battle in Portugal. While Sharpe's leg wound is healing, aided by Harper's treatment, which includes the use of maggots, the rest of the British forces are preparing to move into Spain. There they will ally with the Spanish army and fight the French forces that have occupied Spain.

Soon it becomes apparent to Sharpe that the dangers he faces do not all come from the French forces. First he encounters Colonel Henry Simmerson, a wealthy man who has purchased his command of the South Essex Regiment. Simmerson has no prior military training, yet Simmerson believes himself to be a military genius. Simmerson looks down on Sharpe because Sharpe had been promoted from the ranks. This idea that wealth and social standing is an indication of a person's merit is an idea that Sharpe will struggle with throughout the novel and perhaps the rest of his life.

In addition to Simmerson, Sharpe must contend with Simmerson's nephew, Lieutenant Christian Gibbons. Like Simmerson, Gibbons lacks military training or talent and views Sharpe as little more than an upstart peasant. To further complicate matters, not long after meeting Simmerson and Gibbons, Sharpe humiliates both and receives a promotion. The promotion that Sharpe receives is the one that Simmerson had wanted to grant his nephew.

As if these insults are not enough to make enemies of Simmerson and Gibbons, Sharpe also enters into a relationship with Josephina Lacoste, the woman Gibbons wants. So long before the largest battles with the French forces, Sharpe has created enemies on his own side. And these enemies are fierce indeed. Simmerson has powerful friends back in England, and Simmerson promises to use all of his power and influence to end the career of Richard Sharpe.

Sharpe knows that his only chance to save his career is in doing something heroic, something that has never been done. He decides that he must capture the standard of a French military unit, the gilded eagle. This task is so daring that it is suicidal. It is so outrageous that it seems impossible. But Sharpe's entire future depends on it.

Sharpe faces the French on one side, enemies within the British forces on the other, and in his personal life he is learning the dangers of falling in love. But Sharpe does have assets besides his incredible fighting ability. All of the men under his command admire him, and Sharpe has friends. Sharpe has many colorful friends, and throughout the novel the reader is treated to introductions and tales of Sharpe's many friends. The most notable among Sharpe's friends is, of course, Sergeant Patrick Harper, a giant Irishman with a delightful sense of humor. Other important and entertaining friends include Captain Hogan and Lieutenant Colonel William Lawford.

From the beginning of the novel the pace accelerates through until the end, all the while covering so much accurate historical detail that the reader might forget this is a work of fiction.