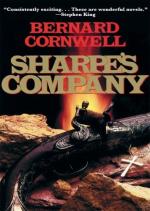 Bernard Cornwell
This Study Guide consists of approximately 37 pages of chapter summaries, quotes, character analysis, themes, and more - everything you need to sharpen your knowledge of Sharpe's Company.

Sharpe's Company: Richard Sharpe and the Siege of Badajoz, January to April 1812 Summary & Study Guide includes comprehensive information and analysis to help you understand the book. This study guide contains the following sections:

This detailed literature summary also contains Topics for Discussion and a Free Quiz on Sharpe's Company: Richard Sharpe and the Siege of Badajoz, January to April 1812 by Bernard Cornwell.

Richard Sharpe, Patrick Harper, and other riflemen participate in the siege of Ciudad Rodrigo and the siege of Badajoz as the British army secures a foothold in Spain. As the bloody campaign unfolds around them, Sharpe re-encounters Teresa Moran and learns that he is the father of her infant daughter Antonia. Teresa returns to Badajoz and relies upon Sharpe to protect her from the ravages sure to be inflicted by a victorious British army. Meanwhile Sharpe's old enemy Sergeant Hakeswill is determined to rape Teresa and murder Sharpe.

The British army fights against Napoleon's forces comprised primarily of French and Spanish forces. General Wellington desires to open the Portugal-Spain border by capturing two national roadways protected by fortified cities. The first assault is directed at Ciudad Rodrigo, and Captain Sharpe leads his men into combat. The fortress is taken with light losses and thus the northern of the two roads is captured. As the British forces redeploy for the assault on Badajoz, Sharpe learns that his promotion to captain has fallen through, leaving him a lieutenant, and causing his beloved company to be handed over to an upstart neophyte fresh from England. During this period Sharpe is reunited with Teresa, a one-time lover and aggressive guerrilla fighter. Teresa informs Sharpe that their last encounter in fact resulted in an infant daughter named Antonia. Antonia is ill and cannot be moved but lies securely in Badajoz. After a brief but happy reunion, Antonia returns to Badajoz to care for the infant. Days later, the British army invests the fortified city and the siege begins.

At roughly the same time, Sergeant Hakeswill is assigned to Sharpe's old company. Hakeswill is an old enemy of Sharpe and is completely amoral and evil. He swears to rape and murder Teresa, murder Antonia, and then murder Sharpe, all simply to demonstrate his hatred. Sharpe, his own influence much reduced by his drop in rank, struggles against Hakeswill's malevolent influence on the company. Hakeswill responds by framing Harper for theft, resulting in Harper being flogged and broken from sergeant to private. It is during this bleak period that the actual assault against Badajoz commences with great slaughter among the British forces. After several waves of assaulting troops are mowed down, the British attack begins to falter. At just this moment Sharpe rallies the men around him and leads an assault against a section of breached wall. The forlorn hope succeeds, as do other nearly suicidal attacks around the fortified city, and within a few hours the British have carried the day. Within the city chaos erupts as the British conquerors begin a debauchery of rape, pillage, and intoxication. Sharpe and Harper rush to Teresa's home to discover Hakeswill already there menacing Teresa and Antonia. The two men wrest control of the situation, largely because Hakeswill's mental condition is unstable; he then flees and all is well. The novel concludes with Sharpe marrying Teresa and Harper doting upon a pretty Spanish girl named Isabella.

More summaries and resources for teaching or studying Sharpe's Company: Richard Sharpe and the Siege of Badajoz, January to April 1812.

Sharpe's Company: Richard Sharpe and the Siege of Badajoz, January to April 1812 from BookRags. (c)2022 BookRags, Inc. All rights reserved.