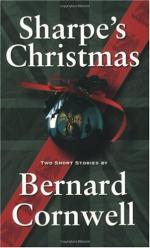 Irati is a small village in Spain where Sharpe is sent to thwart the escape attempt of a French garrison from the fort at Ochagavia. This is the chief setting of "Sharpe's Christmas."

The Fort at Ochagavia in Spain is commanded by Colonel Jean Gudin for four years, but it is burnt down when his garrison abandons it in their attempt to escape to France.

Caillou's Eagle is a small, gilded bronze bird given to Caillou by Napoleon. Since it represents France, losing a French Eagle is the greatest disaster a regiment can imagine. Caillou threatens to kill Gudin if his Eagle is lost during their retreat, but Sharpe allows Gudin to keep the Eagle.

India is mentioned in references to past battles and is where Sharpe served under Gudin, as well as where Gudin was last successful.