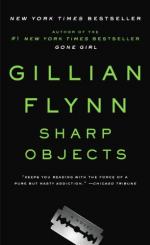 Sharp Objects by Gillian Flynn features the protagonist, Camille Preaker who must return to Wind Gap, Missouri. her childhood home to do a story for the newspaper she works for. Two little girls have been killed and in a grisly move, had all of their teeth removed. There is a distinct reason that Camille doesn't want to return to Wind Gap: her mother.

Adora is Camille's mother, and the reader gathers, not a very nice one. When Camille comes into town to do the story, Adora is anything but welcoming. Camille also learns that she has a 13-year-old half-sister that she knew nothing about. Her mother had remarried several decades ago and hadn't bothered to mention it to Camille, a fact that she is okay with.

The reader learns that Amma presents one face to her mother, but a completely other one to everyone else. She acts like the subservient daughter to her mother, but as soon as Adora's attention is gone, Amma becomes her mother's real daughter and engages in sadomasochistic rituals and actions toward the people in the community. Camille's first inclination that something is wrong with Amma is when she follows her sister down to the family slaughter house and watches Amma clap with glee as the animals are slaughtered.

Camille visits with the local detective, Richard, hoping for some help on the story. He reluctantly tells her just enough to satisfy some quid pro quo with her. Camille also watches as her mother overreacts to the funeral of the two girls. Then Camille realizes that she's doing it to garner attention and sympathy from everyone because Camille's older sister, Marian, died when she was 13 from a terminal illness. The reader learns that it was Camille that found her sister's body in the woods just beside their home.

Richard and Camille have sex and Camille keeps most of her clothes on. She reflects on it afterwards and determines that she really didn't feel anything for Richard. Later, she goes to speak with John Keene, one of the murdered girl's brother. He's being accused of the murders because he fit a profile the police have developed. However, Camille speaks with a young boy from the playground where Natalie was last seen (John's sister) and he tells Camille that an older woman with a housecoat on walked away with her.

Back at the house Amma is throwing a tantrum about a table in her dollhouse. No one can seem to calm her down. She and Camille go to her room and Camille confesses to her that when she's upset she cuts herself. In fact, the reader learns that she cuts words into herself when she's suffering a tremendous emotional upheaval. One of the first words she ever carved onto her skin was the word, 'wicked'. This was shortly after her sister was found dead.

Mother and daughters decide to bond over shopping and head to the local mall. Adora's' sadistic personality comes out when she persuades Camille to try on a dress that shows her cutting scars. Adora makes fun of her and draws attention to the fact that she is damaged goods because she cuts herself. Later, when they return home, Adora tells Camille that she hates her and that she hopes that the last space reserved on her body is for her name. Upset, Camille leaves the house in tears.

Camille runs into Amma behind a store where Amma is getting high. She offers a joint to Camille and she takes it. The sisters smoke until they can't see straight. Later, when they come down off their highs a little, they make it home. The next morning they are still a little hungover and they tell Adora that they have come down with food poisoning. Adora swings into action, happier than Camille has ever seen her. Then it strikes her, her mother enjoys having sick children.

Recovering enough to leave the house, but still feeling horrible, Camille goes to meet with John to discuss his sister and the ongoing investigation. They end up drinking at a bar and Camille realizes they are too drunk to drive anywhere. She gets a hotel for the night and doesn't intend for anything to happen, but it does. The next morning she and John are wakened by the police knocking down the door. Adora fearing for her daughter had called the police to report her missing since she was so ill. The police take Camille and John down to the police station where Camille has to face Richard who has been fully apprised of how she spent her night. She avoids that conversation and instead puts forth her hypothesis about her mother.

She later goes to the hospital where her sister had been admitted and finds a nurse who will release the medical records. The nurse had reported that there were high levels of poison in the girl's system, but since no one could prove where the poison came from, Adora was never charged. Feeling sick herself, Camille understands that her mother has probably begun poisoning her and Amma already. She tells Richard what is going on and he suggests that they exhume Marian's body. Trace elements of the poisons would still be in the bones. Camille doesn't want to disturb her sister's remains and decides, instead, that she will allow her mother to poison her. Then, they will have her mother dead to rights.

Camille returns home, feeling worse. Her mother meets her at the door and asks if she can help her with anything. Camille tells her that she feels terrible and is going to just get a bath. Her mother waits until she is in the tub then walks in with a bowl of milk for her to drink. Camille knows that it is spiked, but drinks it anyway. She miscalculates, however, because the poison makes her very sleepy. She knows that she should get out of the bathtub but she finds that she can't. She's so sleepy and it seems that her muscles won't listen to her. She realizes that she's most likely going to be drown by her own mother. She begins to make her peace with dying when the door bursts open.

It is Richard with the police force. They surrender a warrant, search Adora's room and find several vials of poison in her hatbox along with a page from a diary from several decades previously talking about her poisoning of Marian in order to obtain the attention of a cute male nurse. They arrest Adora and Richard pulls Camille out of the tub. However, they are not able to find any evidence, including the dead girls' teeth, so they can only arrest Adora for the murder of her daughter Marian and the attempted murder of Amma and Camille.

Camille tells Amma that she should come and live with her, and Amma agrees. Amma takes her back to Chicago and enrolls her in a private school where Amma seems to have a good time. However, Amma is also restless and at first rants and raves about everything in the apartment. She becomes particularly disturbed whenever Camille goes near her dollhouse, or refuses to help her purchase extravagant furnishings for it. Finally one day, Camille bends down to take a closer look into the dollhouse and is upset to see that the the floors of the rooms are made of ivory, teeth to be exact. The little girls had been killed by Amma.

Camille calls the authorities immediately who do an investigation and make arrests. Amma and two other girls would lure children down to the river banks, play with them for a little bit, then strangle them. Amma would remove their teeth herself. The other girls were too afraid of Amma not to do her bidding.

Camille is devastated and feels quite alone after all of this. However, her editor and mentor, Curry, asks her to move in with him and his wife. For the first time in her life she is included in a loving family unit and her inner child finally begins to heal.