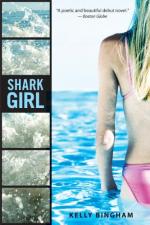 Kelly Bingham
This Study Guide consists of approximately 60 pages of chapter summaries, quotes, character analysis, themes, and more - everything you need to sharpen your knowledge of Shark Girl.

"Shark Girl" by Kelly Bingham is a novel written in verse about a girl who loses her arm during a shark attack. After Jane wakes from a coma after having her right arm amputated, she must relearn everything she once knew as she continually questions why this happened to her. "Shark Girl" is a powerful and touching narrative that shares Jane's inner and outer struggles as she adjusts to her new life with only one arm.

After being attacked by a shark while swimming at the beach, Jane's right arm is amputated and she spends ten days in a coma. Jane hates all the attention she receives since a video of the attack was played repeatedly on the news, and she wishes everyone would just leave her alone. Jane receives multiple letters from other amputees, but she has no intention of being an inspirational story and sometimes she wishes she had died. Jane's family and friends visit her in the hospital, and everyone tells her she is doing well, but she feels useless and wishes they would admit she is a mess. Jane is distraught at the idea that she may never draw again, so she secretly begins practicing with her left hand. She becomes friends with Justin, a younger kid whose leg was amputated, at physical therapy, and they spend a lot of time together. Jane also talks to Mel, a therapist appointed by the hospital who tells her to let herself be sad. Jane begins to wonder if she could have a career in the medical field because she wants to make a difference like so many doctors did for her. When it is time to Jane to go home, she is afraid because she belongs here, but she will not fit in on the outside.

Once Jane returns home, she feels awkward because of all the things she cannot do, and she hates how people stare at her every time she leaves the house. She continues drawing with her left hand, yet she cannot get the eyes of her animals right. Jane is fitted for a prosthetic arm and begins learning to use it. She is furious at Michael's insensitivity when he forces her to mow the lawn, but she is also grateful to be treated normally for a change. Jane is nervous to return to school, and she hates how her classmates stare at her. After Grandma expresses concern that Jane no longer cooks or draws, Jane forces herself to do some chores, realizing she cannot always rely on Mom to do everything for her. She begins talking to the school guidance counselor about medical school and finds something to look forward to. She always experiences happiness when Mom opens her Christmas gift. Still, Jane continues drawing because something will not be right in her until she can do this.

When Mom gets stuck in traffic, Jane has some difficulty making herself dinner, but she is proud of herself and knows it will be easier next time. She allows Mom to photograph her and her friends at her sixteenth birthday party, and she begins volunteering at the hospital on Saturdays, determined to make a difference. Jane dances around her room in excitement when she finally draws a fox with real eyes. Max, a boy she has a crush on, gives her a ride home from school, but when Angie tells Jane that Max is out of her league and continually criticizes her, Jane decides she is done with Angie. Jane is surprised to realize that her amputated arm is becoming part of her. Rachel tries to convince Jane to make up with Angie, and Jane finally apologizes after she realizes that Angie was only trying to protect her from being hurt. Jane gifts Justin with a drawing of his dog on his birthday but knows she will not see him again for a long time because they are both moving on with their own lives. Arguing with herself about the attack being her fault, Jane decides that she is done doing this to herself. Looking through old photo albums of her dad before he died from cancer, Jane realizes the trick to life is celebrating the freedom of not knowing what will happen next. She says goodbye to her arm and starts to look forward to her future, beginning a new photo album of her new life with only one arm.

More summaries and resources for teaching or studying Shark Girl.