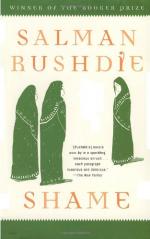 Salman Rushdie
This Study Guide consists of approximately 65 pages of chapter summaries, quotes, character analysis, themes, and more - everything you need to sharpen your knowledge of Shame.

This detailed literature summary also contains Topics for Discussion and a Free Quiz on Shame by Salman Rushdie.

Shame begins and ends in a fantastic house in the town of Q., located on the arid, isolated border between Pakistan and Afghanistan. Nicknamed Nishapur, home of the great Persian poet Omar Khayyam, it is inhabited by three sisters who for twelve years raise a son, named for the poet. They rear him in strict isolation from the world, instilling in his brilliant mind a strange feeling of being peripheral and inverted. In exchange for being allowed to attend school, Omar is ordered never to feel shame (sharam in Arabic). He goes away to medical school and a brilliant career as an immunologist and shame does indeed appear to have no part in his voyeuristic, misogynistic character.

Omar befriends and debauches with a rich playboy, Iskander ("Isky") Harappa, who marries Rani Humayun, who immediately sees Omar as a threat. Isky and Rani have one daughter, Arjumand, nicknamed the "Virgin Ironpants," for her determination to overcome her gender sexually and professionally. On his 40th birthday, Isky hears the call of History and abandons his debauchery to enter politics. For years, he has been the rival of Raza Hyder, a military hero who calls himself "Old Razor Guts." Raza has married Bilquìs Kemal, a woman whose mind is shaken by the suicide of her idealistic father. After a wrenching stillbirth, they bear two daughters, Sufiya Zinobia (nicknamed "Shame") and Naveed (nicknamed "Good News").

The elder, left mentally retarded by a fever as an infant, takes within herself all the unfelt shame of the world, which eventually becomes incarnate as a Beast. The Beast makes her behead a flock of turkeys and she falls ill with the plague of shame. Omar treats her immunological disorder and falls in love with her. At her sister's wedding, the Beast again makes her lash out and she bites the groom in the neck. Omar marries her quietly, nonetheless, but he is forbidden to have sexual relations with her. Despite her mental limitations, Sufiya Zinobia knows husbands are for giving women babies and when her Omar impregnates her ayah Shahbanou,, the Beast again takes over and four young men are forced to have sex with Sufiya Zinobia and have their heads torn off.

Omar and Raza Hyder realize the truth and drug and imprison Sufiya Zinobia, unable to kill her. Raza Hyder, who was placed in charge of the army by Prime Minister Iskander Harappa, has overthrown him, instituted Islamic law and allowed Isky to be tried, brutally imprisoned and executed. Raza is himself overthrown by a military coup and flees with Bilquìs and Omar, to supposed safety in fortress-like Nishapur, disguised shamefully in women's burqas. There, Omar's three mothers rejoice to find Raza, the murderer of their second son Babar, in their hands. After the visitors endure the wild ravings of malaria, the three sisters dispatch Raza Hyder with great gore in the dumbwaiter they had specially customized to serve as their means of limited communications with the outside world. The Beast that has taken over Sufiya Zinobia hunts Omar in the bed where his grandfather died and after a last eye-to-eye confrontation, beheads him. The shell of Sufiya Zinobia is cast off, set free and the spouse-protagonists are consumed in a great fire.