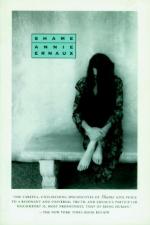 Annie Ernaux
This Study Guide consists of approximately 37 pages of chapter summaries, quotes, character analysis, themes, and more - everything you need to sharpen your knowledge of Shame.

Avant-garde French poetry and prose have been changing quite liberally in the late twentieth century. Gavronsky's collection of twelve interviews with some of France's most important writers explores these developments. The interviews include writers discussing their own creative processes as well as an overview of current literary theory.

A recent collection of essays by both American and European literary scholars, this book discusses various movements, genres, and circumstances of French literature from the ninth century through the twentieth century.

This book is literary criticism of Ernaux's extensive body of work.

Solomon, Andrew, The Noonday Demon: An Atlas of Depression, Scribner's, 2001.

Shame from Gale. ©2005-2006 Thomson Gale, a part of the Thomson Corporation. All rights reserved.