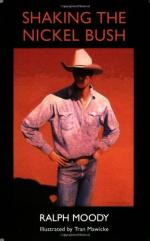 Ralph Moody
This Study Guide consists of approximately 24 pages of chapter summaries, quotes, character analysis, themes, and more - everything you need to sharpen your knowledge of Shaking the Nickel Bush.

This detailed literature summary also contains Topics for Discussion and a Free Quiz on Shaking the Nickel Bush by Ralph Moody.

Shaking the Nickel Bush is a novel by acclaimed author Ralph Moody. This novel follows Ralph, a young man who has recently been diagnosed with diabetes in a time when there was no treatment for the disease. Ralph is encouraged to travel back west where the climate is warmer in hopes that sunlight and a modified diet will prolong his life. As Ralph travels, he befriends a young drifter like himself and the two have many adventures as they search for a way to make a living in an economy still reeling from the First World War. Shaking the Nickel Bush is a fictionalized narration of author Ralph Moody's young adulthood, a story that inspires even as it amuses the faithful reader.

Ralph was unable to go to war due to his position as the head of his family; therefore, he spent the war years working in a munitions plant. When Ralph returns home after the war, his mother is so alarmed by his extreme weight loss that she sends him immediately to the doctor. In the hospital, Ralph's doctor tells him that he has diabetes and that the specialists all believe he has less than six months to live. However, Ralph's doctor tells him if he follows a special diet and goes back west where he can expose himself to lots of sunshine, he should live a good life. Ralph's mother immediately packs his things and sends him to Arizona on the train.

When Ralph arrives in Arizona, he has hopes of getting work on a cattle ranch. However, with all the soldiers returning home from war, there are few jobs to be had. Ralph meets a young man named Lonnie who is also looking for a job. Together Ralph and Lonnie move to another town, hoping for better luck, but find the same story. Then Ralph hears about a movie set that is hiring cowboys to take falls off of horses. Having been a trick rider as a young child, Ralph feels he could do well at this. Ralph goes to the movie set and runs into a man who he knew when his family had a ranch in Colorado. This man takes Ralph under his wing and teaches him all he needs to know to survive the horse falls without hurting himself too badly. With this help and some ideas of his own, Ralph completes thirteen falls, leaving the movie set with more than three hundred dollars in his pocket.

Ralph returns to Phoenix and hooks up with Lonnie again. A kind railroad conductor told Ralph that he would have better luck finding work if he bought a car and checked out some of the ranches further from the railroad. Ralph tells Lonnie his plan and finds Lonnie deeply excited by the idea. Ralph originally only wants to pay fifty dollars for a used car, but finds himself talked into buying a Ford for eighty-five dollars. To get it running, Ralph has to pay nearly fifty more dollars when it turns out the entire engine needs to be rebuilt.

Ralph and Lonnie head out in search of jobs in the country beyond Phoenix. Lonnie insists they head into the hills. However, this causes more trouble with their car. They break a half-moon key that connects the floor brakes to the engine, forcing Lonnie to walk nearly eighty miles to the nearest town. Later, they have a flat tire and discover that the tires have been patched so many times they are useless. When this happens, Lonnie takes a clay horse Ralph has carved and trades it for a new tire. This gives Ralph an idea. In the next town they stop in, Ralph takes a clay horse's head to the bank and offers to make a bust for the banker. This leads to more than six artistic jobs for Ralph at twenty-five dollars a piece. In time, Ralph finds himself working from town to town as an artist, saving up more than a thousand dollars.

Ralph and Lonnie end their business as artists and go to Kansas City where they plan to separate, Lonnie going home to Wyoming and Ralph to his old hometown in Colorado. When they arrive in the city, Ralph learns that Lonnie is out of cash. Ralph pushes Lonnie to sell the car, which is now legally his. Afraid that Ralph will force Lonnie to part with his beloved car, Lonnie leaves town without warning. When Ralph returns to the hotel, he discovers that Lonnie has taken the bulk of his savings from the artist business when he accidentally packed the wrong pair of overalls.

More summaries and resources for teaching or studying Shaking the Nickel Bush.