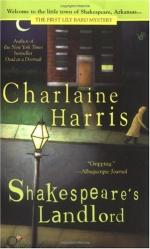 This detailed literature summary also contains Topics for Discussion and a Free Quiz on Shakespeare's Landlord by Charlaine Harris.

Shakespeare's Landlord by Charlaine Harris is the tale of a murder in the fictitious small town of Shakespeare, Arkansas. The murder victim, Pardon Albee, is the owner/landlord of an apartment building that is located near Lily Bard's house. Lily has lived in the house since she originally purchased it from Pardon Albee four years before. Lily is a house cleaner for a number of local residents. She also offers other services—pet sitting, house sitting, errand running, etc. However, since she had been a National Merit Scholar, it is not clear at first why she cleans houses. Lily is a quiet person who keeps to herself and does not socialize with her neighbors. Her only enjoyment is the three karate classes she takes each week. There is a mystery about her background, which the story reveals in gradual fashion.

As the story progresses, there are hints about Lily's mysterious past, her "scars," and the large amount of medical bills she had to pay off. She reacts emotionally and seems to relate to the rape of a neighbor's seventeen-year-old granddaughter. Although Lily has clung to her privacy and has avoided talking about her past, the Police Chief Claude Friedrich does a background check on her and learns what happened to Lily when she was living in Memphis. After graduation from college, Lily was living and working in Memphis. One night after Lily's car had broken down, she was walking along the road to get help. A van stopped for her, and someone forced her in at gunpoint. The man "rented" her to a motorcycle gang, who raped her and cut her with knives, mutilating her upper body. The motorcycle leader left her chained to a bed with a gun containing one bullet. He suggested she could either kill herself or her original captor when he returned to take her back—he had plans to rent her out again. Lily chose to kill the man and did so when he came for her. After that horrid incident, Lily left town and settled in Shakespeare.

The story opens with Lily practicing some of her karate moves. She takes karate lessons from Marshall Sedaka; she has advanced to green belt status. Her thoughts reflect on her appearance. She feels she is no longer pretty because of her scars. Lily has a difficult time sleeping and often goes walking late at night. After returning from her walk at 2:00 AM, she witness a person using her trash cart to deposit a body in the nearby park. She checks the body and recognizes the victim as Pardon Albee, owner/landlord of the Shakespeare Garden Apartments. Not wanting to get involved in fear of her past being exposed, she contacts the police chief anonymously.

The Shakespeare Garden Apartments has eight units and is the backdrop for a real "who-done-it" with lots of suspects. There are apartment dwellers and other local residents who all could have a motive for wanting Pardon dead. Pardon was a nosy, rude person who enjoyed making sarcastic remarks to others. No one was sad to see him go.

Although facing criticism, suspicion and danger, Lily is determined to figure out who the murderer is. Unbeknown to her, she and Chief Friedrich are on the same wave-length and have both narrowed their suspect lists down to the same culprits. Together, after a brutal physical confrontation, they capture the guilty party.

Lily not only solves a murder, she also finds her way to personal peace. After her past is exposed, she faces up to it rather than to move on and hide in another city. Lily Bard has made a new life in Shakespeare, Arkansas. She likes her new life and is not about to give it up.