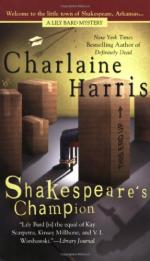 Charlaine Harris
This Study Guide consists of approximately 46 pages of chapter summaries, quotes, character analysis, themes, and more - everything you need to sharpen your knowledge of Shakespeare's Champion.

This detailed literature summary also contains Topics for Discussion and a Free Quiz on Shakespeare's Champion by Charlaine Harris.

Shakespeare's Champion by Charlaine Harris revolves around the character Lily Bard, and the small Arkansas town of Shakespeare. Lily Bard moved to Shakespeare four years ago, searching for peace after a brutal rape and mutilation that had obviously changed her life forever. Though Lily does not focus on her past, it is obvious it affects her every day, from the relationships she forms to the constant trips to the gym to strengthen her body. Body Time is where Lily works out and take karate class, and is owned by her sometimes lover, Marshall Sedaka. Marshall's illness requires Lily to open the gym one morning, which is how Lily comes to find the body of Del Packard, his neck crushed under the weight of a barbell.

Though the death looks like an accident at first, it is clear that there are some questions, as voiced by Claude Friedrich, the chief of police. Claude is Lily's friend, though he wants to be more. Lily is unwilling to give up the true friendship and risk losing Claude all-together. Their relationship is also overshadowed by the death of Darnell Glass, a young black man that had been beaten to death on the edge of town months ago. Lily had come to Darnell's aide one night at the Burger Tycoon, defending him after he was jumped by several young white men. Lily had jumped into the thick of things while two of Claude's deputies had stood on the fringes, one afraid to become involved, the other, Tom David Meicklejohn, had watched with obvious pleasure. The mother of the dead boy considers suing the police department, and Lily would be called as a witness.

As a cleaning lady in the small town, Lily is able to see people at their best and worst, living under the radar, unnoticed by the people she works for, for the most part. An undercurrent of racism is moving through the town, and Lily sees it, dismayed that the haven she had found is turning into a den for ugliness. Small things begin to occur, from black members at Body Time feeling uncomfortable and unwelcome, to racial slurs being painted on the cars of people known to associate with blacks. The blacks in the town meet to discuss the situation and a bomb goes off in the church where the meeting takes place, killing some and wounding many, including Lily and Claude.

Strangers arrive in town, a dark pony-tailed man named Jared Fletcher, hired by Winthrop's Sporting Goods to replace Del, and Mookie Preston, a young woman of mixed race who claims to be a genealogist working for an on-line company. Lily senses that neither are who they say they are, and she comes to find out this is true as the novel progresses. Drawn to the dark haired stranger, Lily realizes that Jared is in fact Jack Leeds, a former police detective from Little Rock who had been embroiled in a love triangle that had ended in the death of his lover and her husband. Jack has been hired by Howell Winthrop Jr. to discover which of his employees in involved in a scheme involving guns from the store. Working undercover in the store, Jack has discovered that several men are trying to form a white militia and bring whites back to power. Though Jack knows which people are involved, Howell Jr. is strangely reluctant to call the police in, seemingly waiting for something else to happen and sure that, despite his knowledge, his family will be safe.

Lily also discovers that Mookie Preston is the half-sister of the dead Darnell Glass, and has come to town to help her mother Lanette Glass. Lily tries to warn Mookie to leave town, but Preston is unwilling, as Lily knows she would be herself. Instead, Lily can only hope that Mookie stays safe and under the radar.

Events in the small town boil over when the men trying to organize the militia discover Jack's involvement, and take him to the store and try to discover who hired him. Lily knows that he is in danger and comes to his aide with the help of Mookie Preston. Darcy Orchard, the seemingly normal "good ole boy," is in reality an angry, bitter man, willing to kill in order to achieve his goal. Working with Tom David Meicklejohn and others, Darcy tortures Jack until Mookie steps forward with a gun and threatens them. A battle ensues, during which Lily learns that Howell Winthrop Sr. has been the mastermind of the white men, encouraging the violence against blacks in the area. Jack is injured as is Lily, but the two struggle to overcome the men, finally winning, but not without tragic consequences. Mookie is fatally wounded, living only long enough to absolve Lily of her responsibility in her death. Preston had, in her mind, done what she had set out to do, make the men who had killed her brother pay for his death.

Lily moves on with her life, unsure how at first, and also unsure about her relationship with Jack Leeds. In the end Jack returns to Shakespeare, apparently willing to do what it takes to have the relationship with Lily that the two seem to need more than anything, something that will help them recover from their pasts and move on toward the future.

More summaries and resources for teaching or studying Shakespeare's Champion.