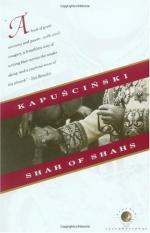 Shah of Shahs Topics for Discussion

What moment does Kapuscinski pinpoint as the precise moment the Iranian Revolution started in earnest?

What was the Shah attempting with his Great Civilization as described? How did this eventually contribute to the Iranian Revolution?

What typical methods did Savak employ to terrorize the citizens of Iran?

Despite the existence of better-known and better-educated ayatollahs, why is Ayatollah Khomeini successful as the revolution's leader in Kapuscinski's opinion?

Why does Kapuscinski feel the Iranian people were especially primed to adopt the Shiite faith?

Why is Shah Reza Khan forced from his throne during World War II?

Who is Doctor Mossadegh and what is his role in the history of Iran?