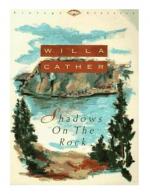 Willa Cather
This Study Guide consists of approximately 34 pages of chapter summaries, quotes, character analysis, themes, and more - everything you need to sharpen your knowledge of Shadows on the Rock.

Shadows on the Rock Summary & Study Guide includes comprehensive information and analysis to help you understand the book. This study guide contains the following sections:

This detailed literature summary also contains Quotes and a Free Quiz on Shadows on the Rock by Willa Cather.

The following version of this book was used to create this study guide: Cather, Willa. Shadows on the Rock. New York: Vintage Books, 1995.

Shadows on the Rock is set in colonial Quebec, Canada. It opens in the year 1697 and covers one year in the lives of the colonists. The main characters are Euclide Auclair and his 12-year-old daughter Cécile. Euclide is a physician and apothecary in the colony. He is also the personal physician to the governor of Quebec, Count de Frontenac. Euclide originally came to Quebec with his wife and daughter after the Count requested that Euclide be his personal physician. Euclide’s wife died of illness sometime after arriving in Quebec. The main narrative opens in the autumn of 1697. One day, while in town, Euclide notices Jacques Gaux, the seven-year-old son of a prostitute. Jacques is kind despite having a cruel mother. Cécile notices Jacques on a later occasion. Cécile befriends Jacques and requests that the Count purchase Jacques a new pair of shoes, as Jacques' are broken. The Count agrees.

Religion is a prevalent facet of life in the colony. Euclide, Cécile, and Jacques are all devout Christians. When Cécile takes Jacques to the cobbler to have his feet measured for new shoes, the cobbler’s mother speaks of the ways in which Christianity is important in her life. Jacques begins to spend more time at the Auclairs’ residence. One day, Jacques’ mother arrives in a rage, insulted by the Auclairs’ charity towards Jacques. However, Euclide manages to calm her down. As Christmas approaches, the Auclairs and Jacques assemble a miniature nativity scene in the Auclairs’ residence. The main religious authority in Quebec is the new bishop, Saint-Vallier, who is pompous and foolish. He frequently makes misguided administrative decisions that are ill-suited to colonial life.

As a doctor, Euclide is well known in the colony, and he has many friends as well as patients. One day, a lumberjack named Antoine Frichette arrives at Euclide’s residence. Antoine has suffered a bad leg injury in the course of his work. Euclide treats the leg but says that it may lose function. Antoine is unsure how he will make a living in that case. Sometime later, Euclide is visited by a French Christian missionary named Hector Saint-Cyr. Hector says that he is quite happy in his work and that he plans to remain a missionary in Canada until the end of his life. Sometime later, Euclide receives a visit from a man named Jules, nicknamed Blinker. Blinker admits that he was employed as a torturer of prisoners in Paris. Desperate to escape this work, he fled to Canada. He says that he now suffers from nightmares and horrific visions. Euclide comforts Blinker and brings him to church for confession.

One of the Auclairs’ good friends is a young fur trapper named Pierre Charron. One day, with Euclide’s permission, Pierre takes Cécile on a journey through the wilderness. Cécile is excited, as she has never done this before. However, she soon feels overwhelmed, and she is happy when she returns to the comforts of domestic life. After the spring thaw, ships arrive in Quebec bearing mail, supplies, and general goods. The Auclairs have a pleasant dinner with one of the ship captains. The Count expects that he will receive a letter from the King that will relieve him of his duties as governor and allow him to return to France. The Auclairs plan to return to France with the Count. However, when the King does not release the Count from his position, the Auclairs decide to stay in Quebec with him. The Count dies of natural causes that autumn. The epilogue takes place 15 years later. The Auclairs still live happily in Quebec. Cécile is now married to Pierre and they have four children.

More summaries and resources for teaching or studying Shadows on the Rock.

Shadows on the Rock from BookRags. (c)2022 BookRags, Inc. All rights reserved.