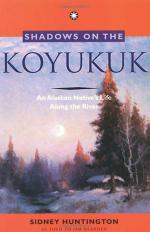 Shadows on the Koyukuk: An Alaskan Native's Life Along the River Summary & Study Guide

Sidney C. Huntington
This Study Guide consists of approximately 29 pages of chapter summaries, quotes, character analysis, themes, and more - everything you need to sharpen your knowledge of Shadows on the Koyukuk.

Shadows on the Koyukuk: An Alaskan Native's Life Along the River Summary & Study Guide Description

Shadows on the Koyukuk: An Alaskan Native's Life Along the River Summary & Study Guide includes comprehensive information and analysis to help you understand the book. This study guide contains the following sections:

This detailed literature summary also contains Topics for Discussion and a Free Quiz on Shadows on the Koyukuk: An Alaskan Native's Life Along the River by Sidney C. Huntington.

Shadows on the Koyukuk is a memoir of Sidney Huntington's life as the son of a white trapper and an Athapaskan Indian mother in rural Alaska. As a child, he learns to live on the land in the Koyukuk River valley. As he grows up, he sees many changes to the lives of Alaskan Natives and becomes a respected public figure in Alaska, a businessman and public servant.

Sidney Huntington's mother Anna is renowned for, after testifying at her stepfather's trial for having shot her husband in self-defense, headstrongly insisting on walking back home over more than 400 miles to be with her children, enduring many trials on the way. At five years old, after already learning much from his parents, Sidney's mother dies, leaving him stranded with two younger siblings. Sidney and his brother and sister are finally rescued, but the traumatic event leaves Sidney emotionally scarred with trust issues.

Sidney goes to an Episcopal mission, and then later his father moves him to a Bureau of Indian Affairs school, where Sidney gets a third-grade education by age twelve. Sidney and his brother Jimmy then leave school to go learn to live on the land with their ailing father. They learn how to trap, and a major accomplishment for Sidney is building his own boat. Their father retires to a job in the village because of his ill health, and Jimmy and Sidney trap together. Eventually, both boys marry and start families. Their father starts a gold digging venture, and dies shortly after giving it up. Later, a mining company working the claim finds millions of dollars in gold near where Sidney's father was digging.

Sidney works as a miner, a trapper, a carpenter, a sheet metal worker, and an entrepreneur. He talks about the old Koyukon ways, many of which are lost as times change. Since elders do not want to be seen as braggarts and have many taboos about the tales they will tell, much oral tradition is lost. During his adventures in the wild, Sidney has several close calls with death and times when he is stuck in the wilderness. He has several children with his wife. Eventually, his marriage ends, and he remarries. He has many children with his second wife, and when their children are grown, they adopt the baby of a single mother.

Sidney loses an eye while chopping firewood. He also deals with a drinking problem that becomes most intense during his second marriage. He quits drinking cold turkey when his wife is hospitalized with tuberculosis, leaving him to care for his young children. In his old age, Sidney has to have triple bypass surgery for a heart problem. By the end of the book, Sidney is an old man. The world has changed around him, but much of the Koyukon River valley remains the same, and Sidney still loves its nature and its people.

More summaries and resources for teaching or studying Shadows on the Koyukuk: An Alaskan Native's Life Along the River.

Shadows on the Koyukuk: An Alaskan Native's Life Along the River from BookRags. (c)2022 BookRags, Inc. All rights reserved.