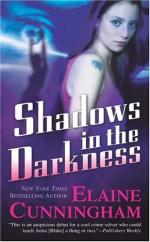 Elaine Cunningham
This Study Guide consists of approximately 55 pages of chapter summaries, quotes, character analysis, themes, and more - everything you need to sharpen your knowledge of Shadows in the Darkness.

Shadows in the Darkness Summary & Study Guide includes comprehensive information and analysis to help you understand the book. This study guide contains the following sections:

This detailed literature summary also contains Topics for Discussion and a Free Quiz on Shadows in the Darkness by Elaine Cunningham.

It is present day in Providence, Rhode Island. Gwen Gellman has been released from the police department due to a bust that goes terribly wrong. She is working undercover in a gentleman's club owned by Tiger Leone. A man named Carl Jamison is killing young virgins in the Providence area. He rapes them, carves a symbol in their thigh (Caer Sidi, which is a path that leads to the Celtic Otherworld) then kills them. He leaves them in hotel rooms for the police to find. While Gwen is undercover at the club she is taken hostage by Carl and taken to a hotel room. She is to be the family's next victim, but she manages to escape. Her sergeant denies having sent her undercover, which starts an investigation that does not end in Gwen's favor.

A year later she's working as a private investigator with the help of Frank Cross, her first partner from the force. Frank is retired and living on the bay. He helps Gwen with her cases when she needs him. Gwen first gets a call from the mother of a young girl named Lauren. Gwen is too late to save the young girl's life, but stumbles into Carl Jamison in the hotel room where she finds the dead Lauren. She manages to cuff Jamison, calls for the police to come, and Carl Jamison is arrested yet again. Gwen hopes this time the charges will stick.

She is called upon again by another mother. This one has a missing fourteen-year-old girl named Meredith. The family is rather well-to-do, so she tries to keep things low profile while investigating the girl's disappearance. The father is an attorney for a prominent organization and, as it turns out, it's his employers who have taken the girl. Gwen gets wrapped up in the case, and as she's working undercover at a club called Underhill, she discovers that the owners are very special. Gwen has always had a gift for seeing things that no one else can and when she encounters the owners, her powers are doing things she thought were impossible.

Ian Forest, one of Underhill's owner's, gives Gwen another case to work on once he finds out she's not a dancer they hired, but rather a private investigator. She takes the missing heir case, but gives it to Frank, because she's working on finding Meredith. Frank ends up dead and she finds him floating in his own bay. Things heat up as she finally opens the missing heir case and finds information on a couple by the name of Avalon. They run off the road in their car in 1971 and the father, mother, and baby girl die in the crash. There is also information on another father, mother, and baby girl who are burglarized in 1971. The family is the Gellman's, Gwen's mother and father; she is the baby girl.

The owners of Underhill are Elders and part of the Celtic Otherworld. Being an elder means that they are like the "grandparents" of their family, or the eldest. Their powers are stronger and their skill in using them is superior. Aside from being an Elder, there is one Elder that is special. This would be the last living relative to their actual blood line. This particular Elder will be able to use the blue gem to gain and utilize their utmost power. The blue gem is passed down through their generations from one "special" Elder to the next. When there is not one to pass it on to, it is put away until another special Elder comes alone. One of the Elder's, thinking he's the last of his kind, takes the gem into his hands upon the Beltane, time of the changeling, and the powers do not work. It can only mean he is not the last of his chain. He sets out to find the one who is the last of his kind and that's where Gwen comes into the picture. The heir is Gwen and the fortune is the blue gem.

The Avalon's switched babies with the Gellman's before they died in the car crash. Then, Gwen's parents are murdered, leaving her to be raised in foster homes, never knowing where her powers came from, nor how to use them. She is silent her whole life, not telling anyone of her gift until Ian Forest comes into her life and makes her realize who and what she truly is.

There are others looking for Gwen as well. The other members of the Celtic Otherworld who are on the wrong side and want to find Gwen so they can use her powers for their own deeds. Wallace is one of these people, and as Gwen investigates she finds out that Wallace is actually her own uncle. She digs further and finds out he is the one who had her parents killed (both sets of parents). He's also behind Frank's murder, and this hits home hard for Gwen.

The story continues as Gwen finds out that the Jamison family are the ones who have Meredith. She meets them at a hotel one night and agrees to take Meredith's place if they let her go and drive her home. Gwen opens up to them, telling them that they will never become Celtic Elders by raping and murdering virgins. She explains that one can only become an Elder by bloodlines that run in the family. She tricks them into thinking if they have sex with Gwen that will make them Elders. They agree to the plan. Gwen seizes a chance at escape and a fight ensues. Gwen manages to kill Carl, but his mother, Sandra, is putting up a pretty good fight. Ian shows up and rescues her, killing Sandra.

Ian and Gwen race to retrieve Meredith who is in the trunk of Kyle's car (Kyle is Carl's brother) at a local park. They arrive in time and another fight starts with Kyle. Ian manages to knock him out and drag him to a nearby tree. Gwen gets Meredith out of the trunk and drives her to the safety of her family. Later, Gwen confronts Wallace at his home. He confesses to killing her parents just as Ian and two of his men arrive. Killing one of their own kind is a serious crime for them, so they take Ian away and Gwen is set free to continue her life as she knows it. It will, however, be a difficult task, considering she's not the same person she always thought she was. She has to live a new life of a Celtic Elder.

More summaries and resources for teaching or studying Shadows in the Darkness.

Shadows in the Darkness from BookRags. (c)2022 BookRags, Inc. All rights reserved.