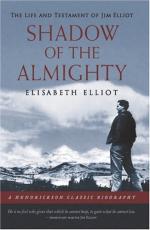 Plot Summary
+Chapters Summary and Analysis
Prologue
Strong Roots
Orator and Garbage Collector
Degree of A.U.G.
Straight for the Goal
Flame of Fire
Behold Obscurity
Wine of Bewilderment
Sheep—Destined for the Altar
Goaded by God
The Renaissance
The Test of Free Time
The Test of Service
Impelled by These Voices
The Pattern Tested
Hemmed in to Nothing
Exactly Timed for God
The Hand is on the Plough
Under Way
Dreams are Tawdry
The Realized Will
Three Challenges to Faith
Lo, This Is Our God
The Pattern at Work
Mission Accomplished
Epilogue
Free Quiz
Characters
Objects/Places
Themes
Style
Quotes
Topics for Discussion
Order our Shadow of the Almighty Study Guide

Elisabeth Elliot
This Study Guide consists of approximately 76 pages of chapter summaries, quotes, character analysis, themes, and more - everything you need to sharpen your knowledge of Shadow of the Almighty.

Shadow of the Almighty Summary & Study Guide includes comprehensive information and analysis to help you understand the book. This study guide contains the following sections:

This detailed literature summary also contains Topics for Discussion and a Free Quiz on Shadow of the Almighty by Elisabeth Elliot.

Jim Elliot's biography is based on not only memories, but also extensive journal entries and letters to friends and family. It is the story of one young man's journey from birth, to following Jesus Christ at a young age that leads him on a journey of faith that eventually carries him to the mission field where he sacrifices his life for his faith. Intimate details take readers by the hand to witness what others see in the young missionary and what Jim Elliot himself thinks and feels as he chooses God's will over his own in everyday circumstances. Shadow of the Almighty is a love story between one man and his Savior and shows how that love and commitment overshadows all other relationships and every thought.

This story grants insight as to how God orchestrates his will on earth and opens with stories of how Jim Elliot's ancestors come to this country and lay the foundation of faith which is passed on to Jim Elliot and his siblings at an early age. His father reads Scripture to his children daily and teaches them to live according to God's Word rather than legalisms and man-made rules. Jim grows into an adolescent that is good looking, does well in school and is willing to help others with their studies. He is also brought up with a love for the outdoors and enjoys hunting and camping, which lay the groundwork for him to survive in the jungles of Ecuador as an adult.

His years in college lay the foundation of finding time for prayer and God's Word even amid tight schedules and social pressures. During this time, he hears the call of God to go and preach the gospel and feels the Lord leading him to Latin America. He visits Mexico, stays six weeks serving with missionaries over summer break, and returns to school where he adjusts his studies to help prepare him in the translation of God's Word into primitive tongues. During his sophomore year, he meets his future wife, Elisabeth Howard, who also has a heart to be a missionary. Both see no room for the entanglement of marriage but form a strong relationship with long talks and times of study together. Jim considers it all the more important to spend time in God's Word and keeps a notebook of what he learns and how God is working in his life. His ways are considered unconventional and yet his living faith convicts those around him.

Near misses with death as a young man include a hunting mishap as a bullet cuts through his hair, and a car stalls on railroad tracks that gets demolished. All this fits with the theme that God is in control and has his time, so that by the end of the book when Jim meets his death at the hands of the Auca Indians, the reader is satisfied that things are as they should be.

As Jim Elliot lives life, he finds comfort in the knowledge that faith in the Gospel is based on fact rather than how he feels. Whether in school, at play, or on the mission field, he prays for the Lord to make him like a fork in the road where people make decisions either to continue their own way or to follow Christ. Yet his trust rests in eternity, as he believes that even if he doesn't see results from his efforts now, he will see them in eternity. This "facts over feelings" mindset governs his entire life, even his love for Elisabeth as they agree in the Lord that it is better for each of them to serve the Lord as single unless He shows them differently. Jim decides that if he is to learn native languages to work among the Indians in South America that he better do it while he is young, because the older you get the harder it is to learn new things. He is willing to go to the mission field without Elisabeth, claiming that God's grace is sufficient to see him through. He urges his parents to leave the matter with God, because they long to see him marry.

In his journal, Jim shares a prayer asking God either to glorify himself to the utmost through Jim or to slay him. This shows his sold out heart, which is evident in his actions as he finally reaches the mission field leaving Elisabeth behind. However, with this step of obedience, God sends Elisabeth to Ecuador—not to serve in the same place but nearby and thus laying the groundwork to have her in place when the time finally arrives for her to join Jim in his work with the Indians. Before they go into the field together, they marry. She helps him in his translation work as well as overseeing the work that needs to be done. They have a daughter named Valerie who is just learning to stand when Jim finally has the opportunity to make first contact with the Aucas. At first, plans for Elisabeth to come along are made but at the last moment, this door closes and she stays behind to learn of her husband's death while fulfilling God's purpose for his life.

More summaries and resources for teaching or studying Shadow of the Almighty.

Shadow of the Almighty from BookRags. (c)2022 BookRags, Inc. All rights reserved.